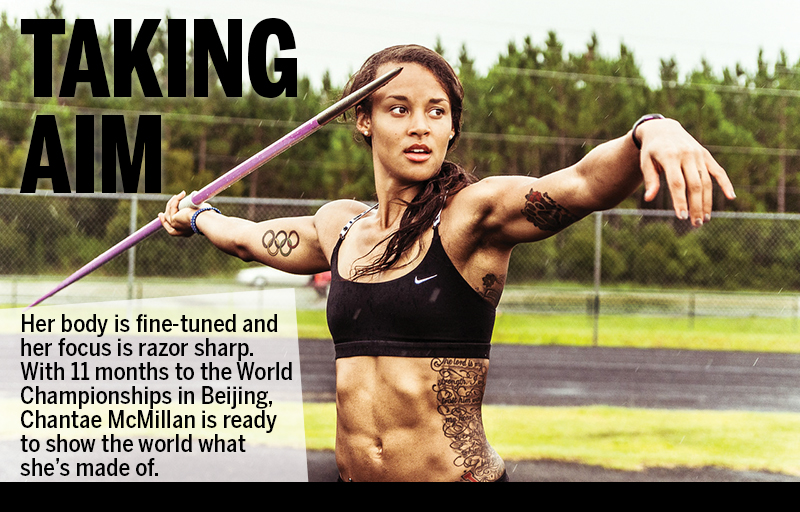 For heptathlete Chantae McMillan, 2012 was a career-defining year. She hit a new personal best and placed third overall in the Olympic trials, securing a spot on Team USA. Later that year, she represented her country at the London Games, where she placed 29th in the world. Today, the 26-year-old is gearing up for a second shot at the world stage, and this time, she plans on bringing home the hardware.

The heptathlon event includes seven skills—100-meter hurdles, high jump, shot put, 200-meter run, long jump, javelin throw and 800-meter run—and is not for the faint of heart. But for Chantae, it came naturally, speaking to her inner competitor and independent nature. “I compete in Track and Field because it is an individual sport, where I am in control of my destiny,” says Chantae. “I specifically compete in the heptathlon because I wanted the challenge of seven events compared to one or two.”

Injury is always a risk when training at an elite level. A few months prior to the 2012 Olympic trials, Chantae temporarily lost her stride at a meet by rupturing her patella during high jump. “I had surgery a week later and started rehabbing the day after surgery,” she says. “All that was on my mind was being ready for the Olympic trials in June and eventually I was, with my amazing team right there with me.” Now training with her coach in her new home (she recently moved to Ohio), Chantae’s strategy is to beat her last Olympic trial performance. “Essentially, it will be based on what we did to get to London in 2012, but updated to accommodate my growth in the sport over the past two years and promote progress.”

“I build a solid base in the weight room and on the track during fall conditioning, then my weight program tapers off to maintenance, and finally my focus is on explosiveness.”

An intense training regime both on the track and in the weight room contribute to her success, but for Chantae, focus is equally as important as fitness. “Training my mind for the Olympics is half the battle,” she says. “It’s about pushing my body past it’s limits without my mind getting in the way, telling me ‘you can’t’ or ‘you’re tired’,” she says. It’s her strong will that she hopes will push her all the way to the podium in 2016. “I want to bring home a medal for USA.”