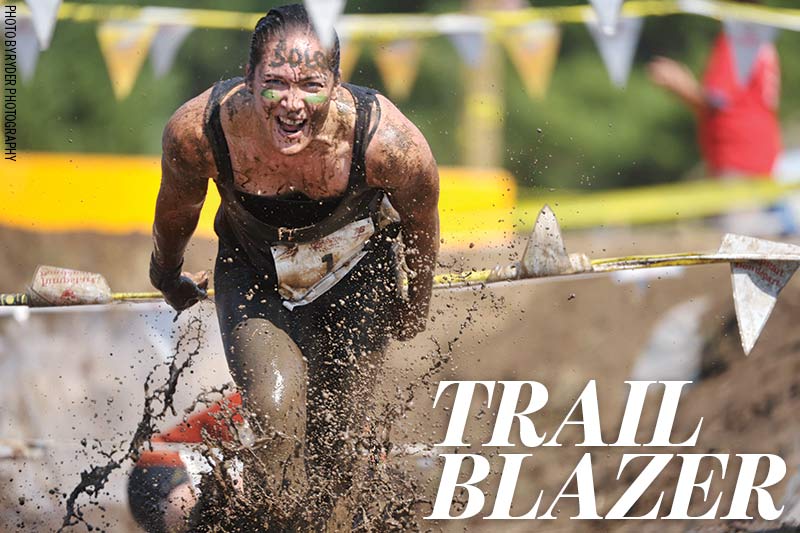 Long distance runner Ekaterina Solovieva has clocked thousands of obstacle course miles and is determined to continue dominating her sport—even if it means getting a little dirty.

If you’ve ever seen footage of a Tough Mudder obstacle course, you know it’s no walk in the park. Most people can barely imagine participating in the hellish 12-mile trek, let alone being the first woman across the finish line, but that’s precisely what Ekaterina Solovieva did in 2013 in Toronto. But that’s not her only claim to fame. Since 2012, she’s been a top competitor in almost every obstacle course and long distance race she’s entered. Today, this 31-year-old Russian-born athlete is aiming big: The Endurance Society Infinitus 88k in Vermont, along with several other extreme endurance events across North America. As long as she feels that runner’s high, this adrenaline junkie has no intentions of slowing down.

For Ekaterina, becoming a seasoned obstacle course runner has been a process that required dedicating her body and mind to the sport. But it all began at a starting line six years ago. “After running 5k, I wondered if I could run 10k. Then a half marathon, and a marathon. Then an ultra marathon. Then a 56-hour event. At this point, I’m more focused on maintaining health and fitness, developing strength and specific skills. But races continue to provide a high—the feeling of existing in a fit body, and seeing what that body can do.”

If you follow her journey on her blog (solovieva.com) there’s no denying she’s addicted to the sport. She races almost weekly, particularly in the warmer months, and has little downtime between events. Consistency in her diet is just one secret to Ekaterina’s stamina, and although she doesn’t modify her meal plan during the year much, she does include a few staples that work wonders for her fueling. “I eat mostly whole foods without prescribing to any particular diet,” she says, “and I focus on getting enough protein and vegetables. Oh, and morning coffee is a must!” As for her training regime, she uses a mix of disciplines, which better prepare her for race day. “My training changes greatly depending on the race I am training for. I run, swim, lift weights, do CrossFit, Olympic lifting and yoga. Regardless of the event, I usually train six days a week.”

“I’m used to seeing more male than female racers in the ultra-long extreme events, but I’m not exactly sure why that is,” says Ekaterina, who now calls Toronto, Ontario home. “In ultra running, women (especially in their 30s and 40s) kick ass. I think there will be more and more female racers in the future.” Although it’s a solo sport, Ekaterina says that it really takes a village to help an athlete through the rigors of training and competing. “I find that my social circle consists of some incredible individuals who are very good at what they do; yoga teachers, nutritionists, Olympic lifting coaches and others.”

With every race comes the challenge of not just what she needs to tackle physically— obstacles, barbwire fences, trenches and hills – but also what she must conquer mentally, too, and every event presents a new set of barriers to crush. “Every race demands something different,” she says. “I’ve never ran an easy race. They were all hard. That’s the point.”