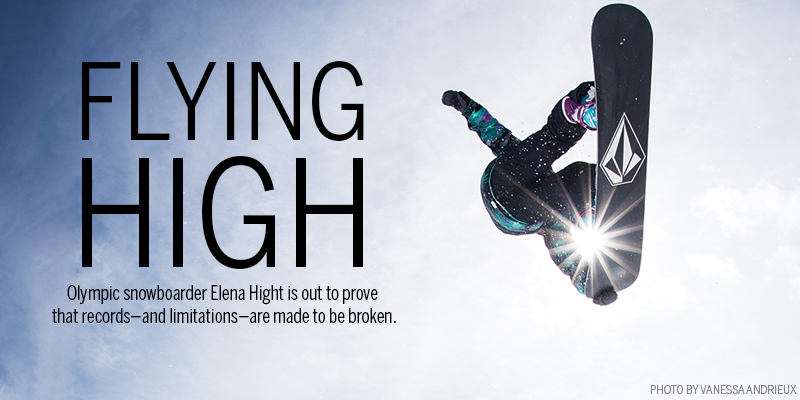 Not many 16-year olds can say they know what it feels like to be part of the US Olympic team, but in 2006, that was reality for snowboarding star, Elena Hight. Born in Hawaii and raised in Lake Tahoe, NV, Elena was first introduced to the sport by her father (an avid surfer) when she was just six years old. A few years later at just 13 she made her first competitive appearance and now, at 25, has represented her country on the Olympic team twice, competing again in 2010. With plans to continue tearing up the halfpipe, and hopes to appear in the next Winter Games in Korea, she is well on her way to becoming a legend in the sport.

The Road to Victory

For Elena, preparing for her Olympic debut meant training outside her comfort zone. “I worked with a trainer and took up running for endurance,” says Elena, who quickly discovered that getting fit on the road would make her better on the slopes. “It definitely helped me become stronger than I had ever been, and taught me how much health and conditioning can make a difference in your performance.” Over the years, her off-snow workouts–and all-important recovery time–have become pivotal to her success. “Mountain biking and surfing are really great cross training activities. I also do a lot of yoga, Pilates, strength training, hiking, and running,” she says. “During my season, I focus mostly on yoga and recovery. Snowboarding is such a high impact sport that you have to combat it with things like stretching, spinning, and light strengthening exercises.”

Olympics aside, she’s had more than a dozen podium finishes in various noteworthy competitions, including the Winter X Games, US Grand Prix, Burton US Open, the Winter Dew Tour, and Vans Cup, and even landed a high profile sponsorship with Volcom (making her one of two women in the world). In 2013, she made history when she became the first snowboarder, male or female, to land a double backside alley-oop rodeo at the Winter X Games Superpipe finals in Aspen, Colorado. “I was completely in shock,” says Elena of the experience. “It was the most surreal moment of my career to date. I didn’t even know that I had made history, but it was a goal that I worked so hard towards for so long, and to complete it under that pressure felt like magic.”

As for the future, Elena plans not only to continue dominating women’s snowboarding, but to film her journey along the way. “The great thing about our sport is that we have so many disciplines including slopestyle and backcountry,” says Elena. “I plan to take advantage of riding a lot of different terrain and documenting it.” Although she doesn’t have any immediate plans to compete in the 2018 Olympic Winter Games, she says she’s not ruling it out just yet. “I’m always trying to push myself to the next level, trying new tricks or new combinations in the halfpipe,” says Elena. “I think that’s what sets me apart; that desire to always do something new.” 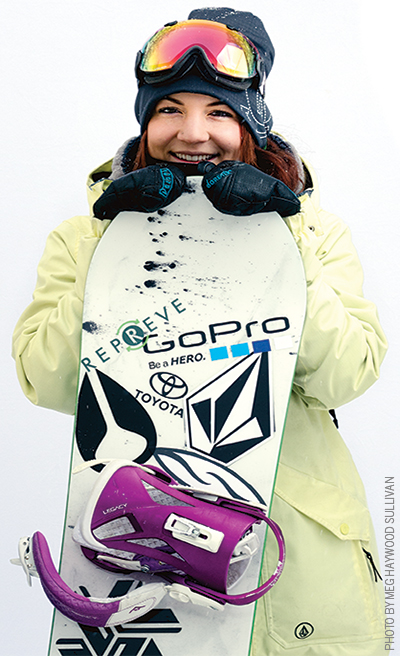