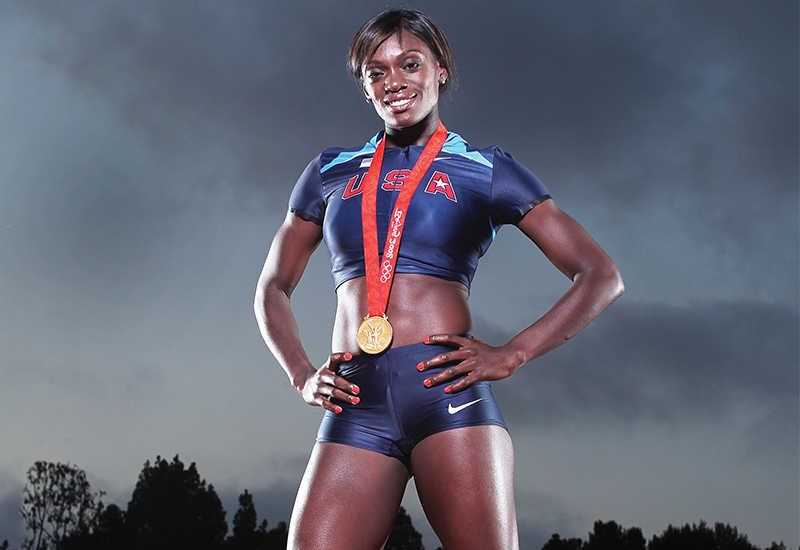 How a two-time Olympic medalist trains physically and mentally
to secure her spot on the track in Rio.

American hurdler Dawn Harper Nelson has tasted victory more than once. In 2008, she won the Olympic gold medal in the 100-meter hurdles in Beijing, then four years later, brought home the silver medal from London. And now, with the 2016 Summer Games in Brazil just on the horizon, that familiar hunger has returned, and she won’t stop until she’s satisfied, and standing on top of the podium.

The Mental Game
Athletics, according to Dawn, is a scenario of mind over matter and mastering the self. “I’ve always been willing to accept all of the mental challenges that come along with the end goal,” she says. At times, exploding out of the mental blocks can be more difficult than the starting blocks, but Dawn doesn’t break her focus. “When you’re hurdling in the right way, it’s poetry in motion. [That’s when] I get to a point in the race where I feel unstoppable.”

Fun Fact:
Dawn Harper Nelson is the first American 100-meter hurdler to ever
win gold at an Olympics, and medal in the following Olympics.

Fast Learner
Dawn’s athleticism was apparent at a young age. With the help of her coaches, she developed undeniable talent throughout her childhood. Her earliest achievement was sprinting, but later, Dawn’s coach convinced her to pursue—and master—one specific skill. “After years of practice with my coach guiding me, we discovered that I had a real natural talent for hurdling,” she says. In high school, Dawn began to redefine herself through the sport, and in her freshman year, she won her first state championship and broke the Illinois State record for the 100-meter hurdles with a time of 14.03 seconds.

Off the Track
Dawn’s exclusive off-the-track training schedule is organized and effective. Dawn hits the weight room four days a week and practices yoga to relieve tightness on Fridays. Dawn notes there is a specific need to maintain a regimen of continuous stretching, both pre- and post-training.
In the gym, she performs sled pulls to enhance the drive phase of her race. She incorporates an extensive amount of squats and leg presses to strengthen her VMO muscles and quads, and increase her power. As Dawn’s career began to thrive, she embraced more hamstring exercises such as deadlifts and plyometrics. She notes that such a routine has made her a stronger, faster champion. “Every exercise is focused on running down a straight line.”

Olympic Dreams
Right now, Dawn’s sights are firmly set on making her third Olympic team in 2016. She embraces the challenge, and only focuses on the win. “What keeps me motivated is still working to perfect my race.”