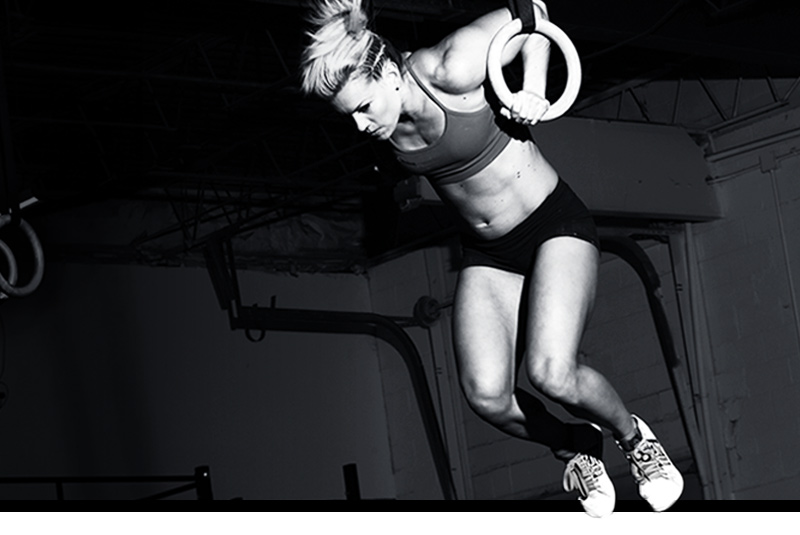 At just 26 years old, crossfit athlete Libby DiBiase has already mastered motherhood, muscle-ups, and a 315-lb deadlift. She has nowhere to go but up. Libby DiBiase is full of surprises. She may not clear 5’4”, but the young mom from Omaha is a rock-solid, steak-eating, clean-and-jerking machine. Equipped with a deadly combo of strength and stamina thanks to years of track, soccer and gymnastics, she’s found a permanent home in the sport of fitness, and she’s muscling her way to the top.

LIBBY, MEET CROSSFIT
When she was just 19 and participating in track and field at the University of Nebraska, the strength and conditioning coaches approached her to give CrossFit a go. “I tried it and have been hooked ever since,” says Libby. Soon after, she joined some fellow CrossFitters to train for the 2008 games in Carson, CA, where she placed sixth. Since then, Libby’s been on the fast track to success, training hard six days a week using strength, gymnastics and mobility exercises and signing on to work with brands like Gaspari and Reebok.

LABOR INTENSIVE
While she made modifications to her training throughout her pregnancy, Libby was in the gym right up until the day before she gave birth to her son. “Some people at the gym told me to try this workout called ‘The Inducer’, which is seven rounds of seven pull-ups and seven wall-balls,” says Libby. “The next day I was driving to the gym but my back was hurting and wham! The next
day Cruz Patrick was born.”

WORKING MOM
As a new mother, Libby quickly discovered that she would need to make extra efforts to keep up with her workouts, school (she’s earning her Bachelor’s degree in healthcare administration) and her part-time job as a nutrition counselor. “You just make time for all of it. I have a schedule set in place everyday for when I work out.” And she’s not slowing down. As she preps for the 2014 CrossFit Games qualifier, her training schedule remains as intense as ever.

“The best thing I can do is think positive. If any negative thoughts go through my head, the workout will go south.”