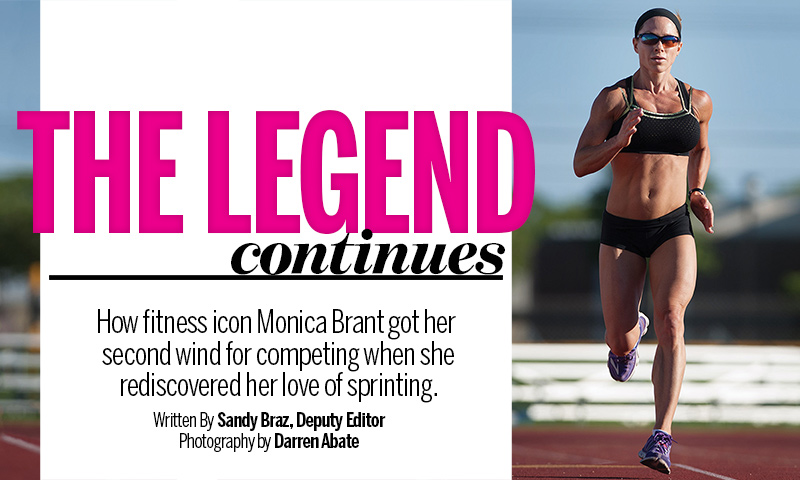 You hear the name Monica Brant and instantly think of one of the most celebrated figure and fitness athletes of all time. From consecutive top three Olympia wins and two World Champion titles, to landing magazine covers and sponsorships, there are few corners of the fitness world Monica hasn’t touched. But since retiring from contests in 2013, she’s been making a name for herself on an entirely different stage: the sprint track.

BORN TO RUN
Over the last two years, Monica has competed in about a dozen races around the world crossing the finish line with some of her best times. But her sprinting career started long before that, back in her youth when she was first introduced to the track. “My love of sprinting took off way back in the sixth grade,” says Monica. “I had a very successful young track career and still own the winning state record for my high school in Castroville, Texas.” But that’s just the beginning of Monica’s love affair with the track.

SPRINT JUNKIE
In 1995, Monica was reintroduced to sprinting by a coach in Los Angeles to help with her conditioning for the Figure stage. For 10 years, running became a regular part of her training, and in 2011, she met a coach who invited her to run with his team of sprint athletes. What began as a training technique to help her lean out for the stage soon evolved into an outright passion when she placed fourth in her age group (40-44 years) in the 100-meter dash.

FUELING THE PASSION
Solid nutrition has remained a constant throughout her competitive career, both on the stage and on the track. “For sprinting, I’ve added fruits like small organic apples, strawberries and blackberries to my diet,” she says, in addition to plenty of muscle-saving protein sources including chicken, turkey, shrimp and eggs, starchy carbs in her last meal of the day, and healthy fats. “When you’re sprinting, you really need nutrition to play its role, otherwise it’s a waste of time to head to the track with a low fuel tank.”

“I adore being an athlete and putting myself to the test.”

TRAINING FOR SUCCESS
Fueled with passion and a nutrient-dense meal plan, Monica hits her training schedule with the same intensity as always.
MON. AM: 1.5 hrs on the track: Speed conditioning and starts.  |   PM: 1-1.5 hrs of leg training in the gym (anaerobic)
TUES. AM: Active recovery on the track 1 hr. with warm up
WED. AM: 1.5 hrs on track: endurance training/aerobic for 400m sprints
THURS. Off
FRI. AM: 1 hr.on track: active recovery.  |  PM: 1-1.5 hrs upper body weight training in the gym
SAT. AM: 1.5 hrs on track speed conditioning for 100/200m sprints
SUN. Off