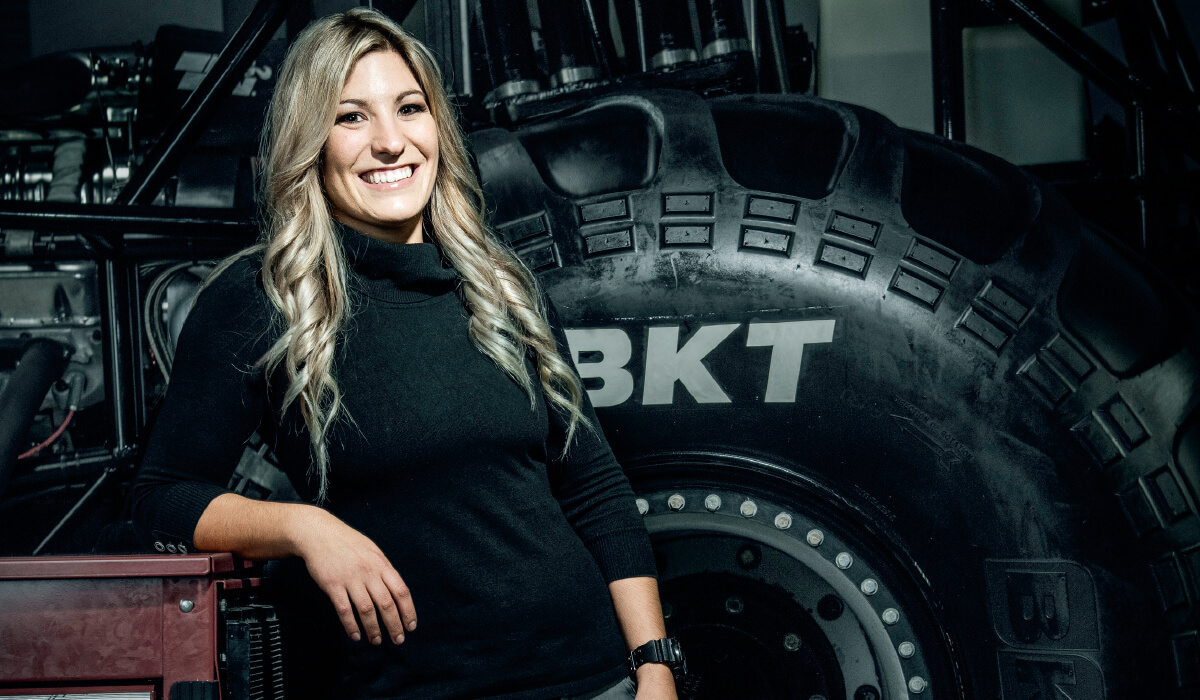 Cynthia Gauthier doesn’t just drive a cool truck—she drives a 12-foot, 120,000-lb, 1500 horsepower monster truck with enormous dog ears, a tongue, and a tail. This fan-favorite, known as The Monster Mutt® Dalmatian, dominates the course with 30-year-old Cynthia maneuvering the machine to perform donuts in the dirt and sail over rows of cars. If you’ve never sat on the edge of your seat at a Monster Jam event, Cynthia explains why her sport is the ultimate adrenaline rush, and how CrossFit keeps her at performance peak while making her feel at home no matter where she’s tearing up the track.

Motocross, NASCAR, even tractor-pulling races—as a kid, Cynthia was obsessed with watching any kind of vehicles in their elements, but it wasn’t until she was 18 that she finally purchased her first dirt bike, pick-up truck, and racing trailer. She was instantly hooked. Working during the day and attending university in the evening, Cynthia’s weekends were for racing. “It was a lot of sacrifice for me,” she says. “But it was worth it. My passion for racing grew more and more.”

After three years in the amateur class and two years in the Pro Women’s Canadian National Series, knee and shoulder injuries urged Cynthia to race off-road buggies instead, a sport that satisfied her motocross roots, but offered her the protection of a roll cage.

Women at the Wheel

During the US off-road buggy tour, Cynthia crossed paths with Monster Jam, and in 2013 was hired to travel with the tour to handle truck maintenance. Eventually, she test drove for them and was offered a spot as a driver in 2015. “The adrenaline is insane in a Monster Jam truck,” she says. “It’s one of the biggest racing vehicles out there.”

Monster Jam is one of the few sports in which men and women compete together, and as of the 2018 tour, Cynthia is one of 15 women on a 90-driver crew. She’s currently part of the Monster Jam Triple Threat Series, a thrilling competition where she gets to race not just her monster truck, but also a speedster and ATV.

Fitness gives Cynthia an edge on and off the track. When she’s preparing to drive, her pre-show ritual includes a hotel workout and belting out a song with her crew chief (“It calms my nerves and makes me smile”), followed up by stretching or yoga to wind down afterward. After Cynthia’s motocross injuries, she turned to CrossFit to build strength. “No matter where I travel with Monster Jam, I can drop in to a gym and everyone is so welcoming. I have a CrossFit family all over the world,” she says. Since maintaining her workouts, her post-race soreness has decreased and she has tons of extra energy. “It makes a big difference in your performance when you have energy from the beginning until the end of the show.”