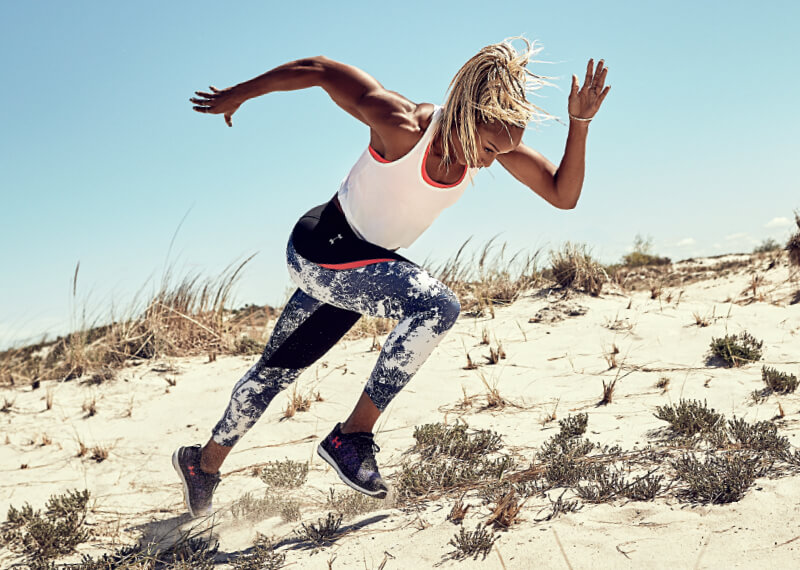 Photo Courtesy of Under Armour

Two-time Olympic gold medalist Natasha Hastings has learned to always live in the moment. Whether that means lining up at a race on the world’s largest athletic stage, building incredible power in the weight room, or finding new ways to educate audiences on her sport, she knows the most important asset you can have is faith in yourself.

Natasha first hit the Olympic track in 2008, competing in the Women’s 4 × 400 m relay team, and took home a gold medal. Her perspective shifted when she returned to the same race in 2016, though. “As an older competitor in Rio, I learned to be more cognisant of my surroundings,” she remembers. “I made a point to stay present while I was on the track or making friends in the village.”

Natasha felt the pressure of millions of eyes watching but she treated the race no differently than any other, and the approach scored her a second gold-medal placing. “I was still nervous, but I managed it better. It was the right amount of nerves and adrenaline,” she says. Now she’s working to qualify for Tokyo in 2020, but admits that she knows anything could happen before then—even more reason to appreciate the moments as they happen now.

Natasha trains five days a week, and not just on the track. “I’d stay in the weight room all day if I could,” she laughs. “People think track athletes spend all their time running, but sprinting relies heavily on strength.” She favors building power with plyometrics, power cleans, and squats (although she admits these are
a love/hate relationship).

Natasha follows a nutrition plan dictated by allergy testing from a holistic doctor, and even though sometimes she’s disappointed with the results (“I love seafood, but the test told me to stay away from all shellfish.”), she’s noticed a considerable difference in her body composition since adhering to the plan.

When Natasha began receiving questions about a particular lipstick she was wearing, she started a YouTube channel to answer that, and many more inquiries. “I saw there was a void I could fill. These videos help educate people about my life, and other track athletes,” she says of her series that includes behind-the-scenes information on races and workouts.

She also adamantly encourages future track stars, and is setting out on the Empowerment Camp tour, kicking off this March in South Africa. “I wish I would have had someone to talk to about what I dealt with growing up—running during menstruation, health and beauty, body image. I want to show the girls that it’s empowering to have an open conversation with the woman next to you.”