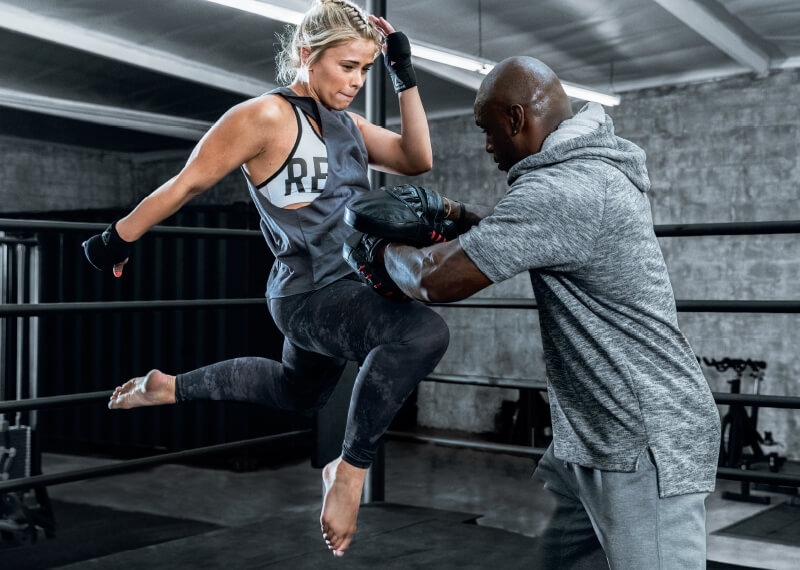 In September 2017, UFC fighter Paige “12 Gauge” VanZant suffered a huge blow—but it wasn’t inside the octagon. Just weeks before her first Flyweight-division fight against opponent Jessica “Evil” Eye, Paige was forced to withdraw from UFC 216 on advisement from her doctors due to an intervertebral disc injury. But as Paige put it via Twitter, “When it rains, it pours,” as she also simultaneously battled ear and sinus infections, all adding to the disappointment of missing out on the inaugural fight. Now, Paige is back in training camp with her fight face on, ready to finally debut in her weight class on January 14.

In 2013 at the age of 19, Paige joined the UFC’s Strawweight division (ultimately defeating her debut opponent in a TKO and being awarded the Fight of the Night). Within the next two years, Paige was pitted against five other contenders, only giving into submission twice. But Paige says she was killing herself to meet the federation’s 115-lb max weight limit, which is why moving into the 125-lb Flyweight division could mean big wins for Paige. “It [was] a big cut for me,” she told The MMA Hour. “I’m going to be healthier, stronger, and faster. I can’t wait to show that off.”

Paige describes herself as a freestyle fighter, with an unmissable signature style of close-range grappling and leg locks, which her opponents often struggle to find release from. She trains multiple times per day in different styles of mixed martial arts, including jiu-jitsu, Muay Thai, and wrestling, and mixes in conditioning and adequate recovery time. To fuel her training, Paige uses organic meal-delivery company Trifecta, which takes care of her nutrients and macros — what she calls her “key to victory.”

BACK IN THE OCTAGON

The back injury that prevented Paige from making her Flyweight debut in 2017 stemmed from an older herniation that first occurred when she was just 13 years old. “I’ve been working with doctors, doing therapy and treatments for years,” she says. “It’s something I’ll probably have to live with for the rest of my life.” But after taking some time off recently to heal, she says she’s ready to get up and running again. With her next fight set this month against opponent Jessica-Rose Clark, she’s in full-time training and working harder than ever to earn her place in the division. “My teammates and strength coach are pushing me through hard workouts,” she says. “They’re keeping me at my athletic peak.”

Paige’s memoir, Rise: Surviving the Fight of My Life, recounts her struggle with severe bullying until she ultimately discovered her inspiration to fight back, and is set to launch in April 2018. “People ask me all the time why I fight, and this book has the answer. I hope to inspire people to get up every day and keep fighting,” she urges.

How This Olympic Sprinter Keeps Her Feet on the Ground