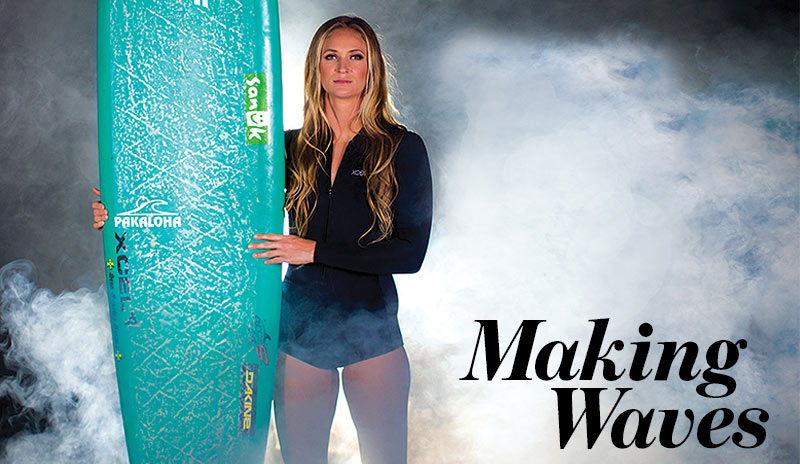 Paige Alms isn’t your average surf Betty. Haven’t heard of her? Read on. You won’t be able to stop Googling her after this.

When you think of the typical surfer, you might picture a wavy-haired dude with a perfect tan and board shorts. But that’s not what you’d find on some of Hawaii’s roughest waters, including points like Peahi, Maui. This dangerous surf notoriously known as “Jaws,” where waves can reach up to 60 feet, is a Mecca for big wave riders and pro surfers. It’s also where 27-year old Paige Alms made history in January, when she rode the biggest barrel ever by a woman. Since then, Paige has starred in The Wave I Ride, a Kickstarter-funded documentary, which chronicles her career in a male-dominated sport, and just recently took home the World Surf League’s XXL award for the Women’s Best Overall Performance. So where will she go from here? For now, she’s just on the hunt for the next big wave.

When you look at her track record, there’s no question that Paige’s skills on the board are innate. The self-taught surfer started at the age of 9, and at just 13, she won the US Championships for 17 and under, a huge achievement for a newcomer. Now, she’s one of the best – and one of the few – women in her sport. “I’m living my childhood dream,” she says. “I’m a professional surfer.”

Another dream come true for Paige was being barreled at Jaws, which means surfing inside the hollow break of a wave — a feat few surfers, man or woman, have accomplished. “I realized instantly that I had finally done something I’ve always dreamed of doing,” she says. “When I got home, the video had gone viral around the world. I felt so fulfilled and accomplished.”

On the water up to three times a day, Paige keeps her body strong and agile with a consistent gym routine of weights and functional workouts. But riding 25-foot swells takes more than just physical training. “I try to conserve energy and just relax. I try to find a place in my mind where I have utter confidence stored away.”

With the majority of the surfing community consisting of men, Paige says sexism still permeates the sport. “Women are killing it in this sport! We need the surf industry to support its women as athletes and not just marketing tools.” Until then, she’s hopeful she can be a role model for young women riders. “I’m driven to leave a mark on the surf industry. I want to look back on my career and know I made a difference.”