Home Motivation Athletes “I shatter stereotypes just by lining up at a race.” 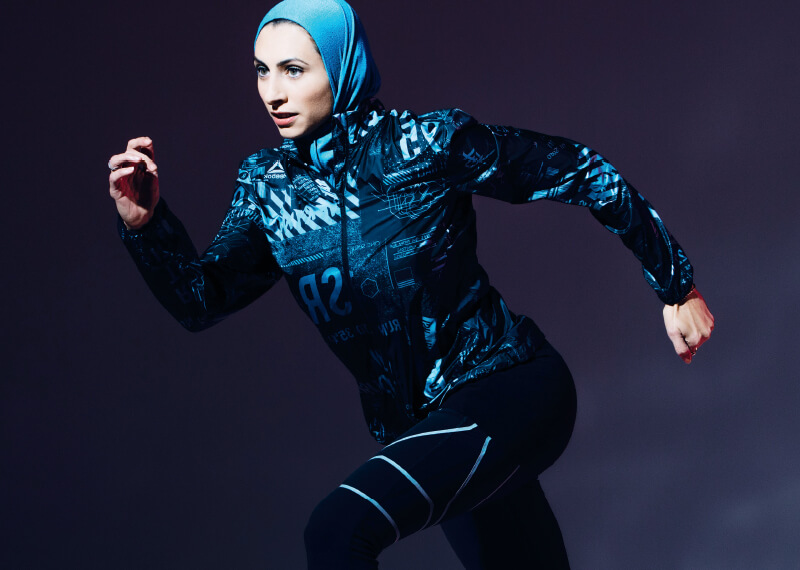 Rahaf Khatib doesn’t just make headlines—she makes cover lines. After authoring a comment on a Women’s Running Magazine post of a transgender runner about how empowering it was to see diversity in a fitness publication, but that her own community of covered Muslim women were still underrepresented, Rahaf was offered an opportunity to break a glass ceiling. “At first, Women’s Running told me I would be featured as one of 20 kickass women in running. The next day, I received an email stating they wanted to feature me on the cover,” she says. As the first hijabi woman to ever be on the cover of a fitness magazine, Rahaf was elated to finally represent her community, but to her, it was just the first step in what she knew would be a longer race.

Rahaf and her family immigrated to Michigan in 1983 from Damascus, Syria when she was just eight months old. She grew up like any other American kid—cracking up at Full House and Saved by the Bell, and perfecting Michael Jackson’s moonwalk—but on the weekends, Rahaf would attend Arabic school and learn the Quran. She adored the outdoors and spent hours bike riding, but oddly enough, hated running.

Fast forward a couple of decades, and after the birth of her third child, Rahaf found she craved something most mothers can relate to: “Me Time.” It was in that pursuit that she enrolled in a local gym and began taking fitness classes, but she still coveted a loftier challenge. In 2012, after her son’s gym teacher suggested that Rahaf register for a local race, she knew she had found what she’d been looking for. “I saw people of all abilities running, and it really touched me,” she remembers. “I crossed the finish line feeling like a million bucks. I was instantly hooked.” Rahaf returned the following year and finished her first half marathon at that same race. 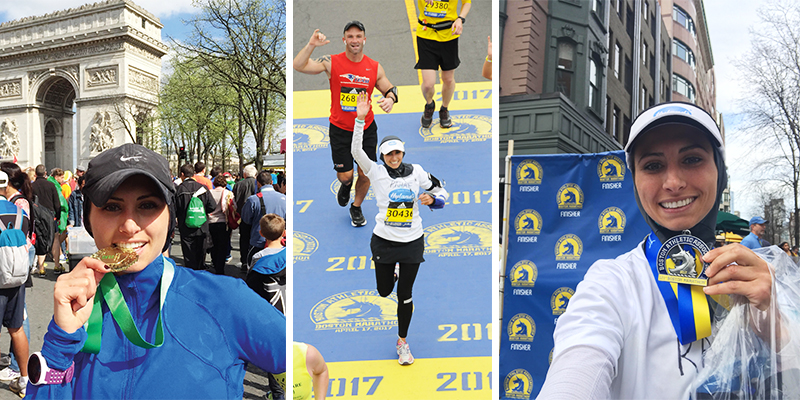 “Running has become a vehicle of social change for me. It has given me a voice to educate everyone about my peaceful faith at a time when Islamophobia is on the rise.”

For Rahaf, her first full marathon, the Detroit Free Press Marathon, tested her physically and mentally. At mile 22, she says she questioned whether she was even capable of finishing it. “But I couldn’t give up,” Rahaf recalls. “I finished it, and kept coming back for more. I felt I had conquered the world.”

Conquering the world was just the beginning, though, and last April, Rahaf also pledged to give back to it. Hylands, a company specializing in natural remedies, sponsored Rahaf in the 2017 Boston Marathon where she fundraised for Syrian refugees looking to make a life in Michigan, setting a goal of $5,000. But with the help of her social media platforms, she wildly surpassed that goal and raised a total of $16,000. “Running has become a vehicle of social change for me,” begins Rahaf. “It has given me a voice to educate everyone about my peaceful faith at a time when Islamaphobia is on the rise. I shatter stereotypes just by lining up at a race, but at the same time, I feel included and loved by my fellow runners.”

Rahaf’s training varies depending on if she’s preparing for a marathon, but during the racing season she runs four to six times per week, switching it up between speed, hill, and long run training. In addition, she practices yoga and strength training twice per week, both of which she says are crucial to her marathon preparation. In the off season, Rahaf commits to more yoga to help with balance and core strength, and she adds swim training.

To date, Rahaf has completed nine marathons, 14 half marathons, two sprint triathlons, and two 20- and 30-mile bike events. She’s currently training to complete all six World Major marathons, four of which she’s already run. She educates audiences on her experience as a Muslim American at events, and hopes to team up with an agency to work with on her quest to represent more covered women in the fitness modeling industry.