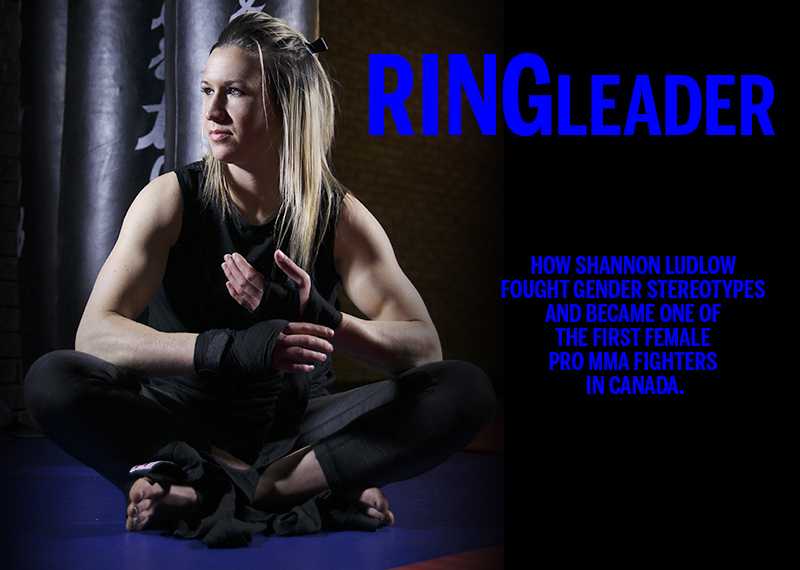 Shannon Ludlow wasn’t your typical teenager. While the other sporty kids were playing soccer, running track or trying out for cheerleading, Shannon was seeking out a new physical challenge that very few girls her age had ever considered: boxing. “My heart was set on trying this gruelling, disciplined sport,” says the now 26-year-old. “The first time I put a boxing glove on, I felt like I finally found what I had been searching for. Punching and coordination felt as natural as breathing.” Eleven years later, she’s a professional mixed martial arts fighter—the first out of the city of London—with more than 20 amateur and pro fights under her belt. To this day, she has no idea how many fights were wins and how many were losses. But she knows her involvement in boxing has helped open doors for women in the sport, and that’s one of her greatest victories.

FIGHT TO THE TOP: At just 16, Shannon was training under late famed MMA coach Shawn Tompkins (alongside reputable UFC fighters Mark Hominick, Sam Stout and Chris Clements, just to name a few), and made the progression from boxing to kickboxing. She had found her calling and she was ready for the ring. After competing in several amateur kickboxing and boxing fights as a teenager, Shannon was once again looking for another new challenge. Around the age of 20, she learned wrestling and jiu jitsu—she was officially a mixed martial artist. “The night of my first pro fight, I realized I had finally made it,” she says. “I was ready to become a role model for a lot of females that were nervous to try combat sports or were struggling with their confidence.”

TRAINING FOR SUCCESS: Whether she’s training for a fight or just to stay in fighting shape, Shannon’s training schedule combines aspects of a number of disciplines involved in MMA. “Every week I do pad work for my boxing, jiu jitsu for my ground work, and wrestling to work on takedowns and defense.” She works her cardiovascular endurance by running and improves her flexibility through yoga.

THE COMEBACK KID: Even for an experienced fighter, losses are a hard pill to swallow. But Shannon offers this advice for bouncing back from a disappointing match, “After a loss, I spend time evaluating myself,” she says. “In a fight I’ve lost, it’s usually because my mental toughness was lacking. So I seek out ways to create a stronger mental image of myself.”