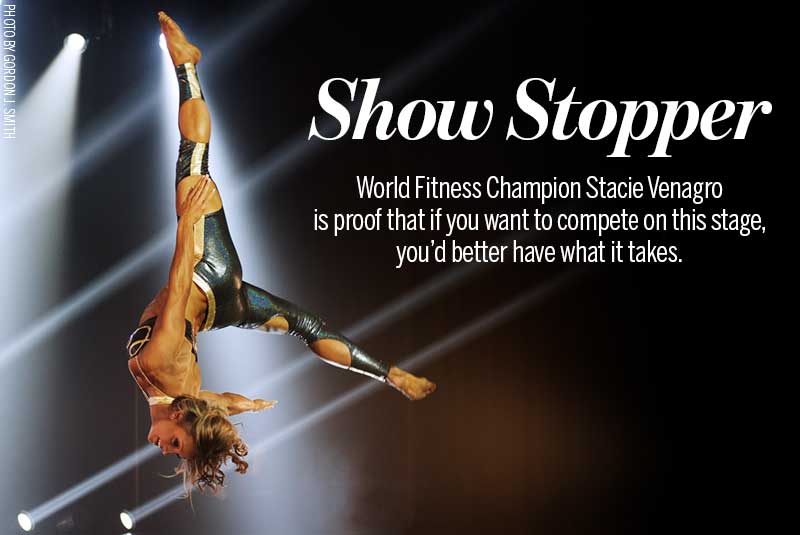 To become a professionally ranked competitor in the Fitness category takes more than an incredible body. Once hugely popular in the world of women’s bodybuilding, Fitness is a contest not only of musculature and posing atop five-inch heels, but also gymnastic ability, endurance and physical strength. Today, the Fitness category is continuously shrinking, and many in the industry consider it a dying sport. But to four-time World Fitness Champion Stacie Venagro, the show must go on.

Healthy Obsession
Stacie grew up as a kid who danced, twirled, ran and played sports; she was into everything from acrobatics to basketball. So it was no surprise when, in her late 20s, she started competing in Fitness to combine her high energy and physical strength. “I needed to do something to showcase what I could still accomplish at 27,” says Stacie, now 30, who has brought home six first–place trophies since her debut in 2012. “Someone in the fitness world showed me the ropes for my first show. Once I got on that stage, I was hooked.”

Performance Enhancer
With a dwindling presence in the industry, one could wonder what motivates a competitor to stick with the Fitness category. But for Stacie, there’s no shortage of love for the sport, especially when it comes to creating a theme for her performance. “I’m a powerhouse when it comes to my routines,” she says, “My last theme was based on the film 300; I love capturing the audience’s attention and bringing them into it.”

Stage Prep
“Outside of weight training six days a week, I also do functional training and calisthenics to help me with my routines,” says Stacie, who uses HIIT, box jumps, push-ups and running to get her body into show shape. “Sprints are another good workout to prep, since they help tone my legs and glutes, as well as help build endurance.” Closer to show day, she likes to practice her routine in small blocks to build up her stamina, both mentally and physically.

Future of Fitness
Although it attracts fewer competitors, the Fitness category still draws a huge audience, remaining one of the most interesting spectator sports in bodybuilding. “I think the category is starting to be eliminated simply because fewer women are doing it and it takes a toll on your body,” says Stacie, who currently runs her own fitness studio in Rhode Island. “But I see it being around for a few more years, even though it seems to be getting smaller.”

“Some put their headphones on and practice routines over and over. I prepare by asking the other competitors if they need help with anything in their routines. It gets me out of my own head and out of my own way.”