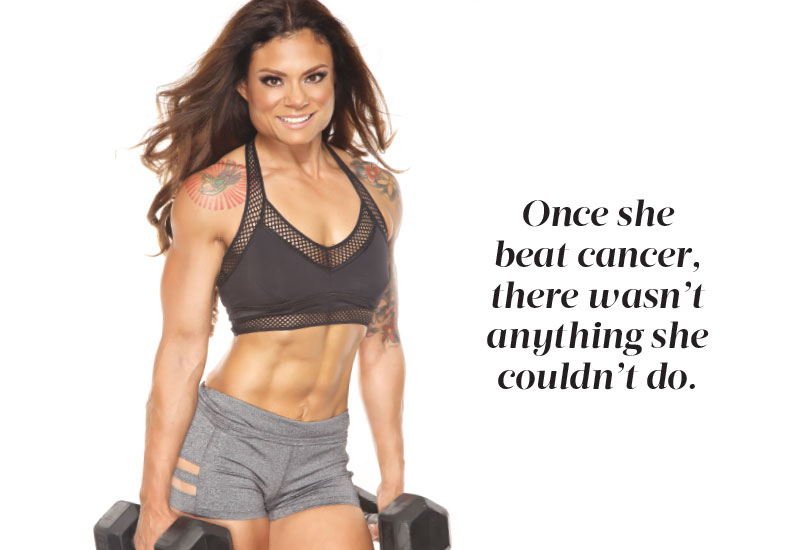 The Fourth of July in Texas is typically celebrated with large amounts of brisket, backyard barbeques and heavy drinking. But on July 4th 2013, Deziree Slusher found herself in the gym looking in the mirror, taking a picture and promising herself life would be different from then on.

Deziree’s wake-up call had come the previous year when an MRI scan following a car accident revealed a Stage 3 cancerous tumor in her throat. As devastated as she was by the news, it had an upside: it was the final push she needed to change her unhealthy lifestyle. In college, she was athletic and played soccer. But somewhere along the way, she stopped being active and began binge drinking and eating. “In my twenties, food became my antidepressant,” says Deziree, who admits she tried every type of diet over the span of 12 years in an effort to lose weight. But despite her attempts at dieting, by the time she was 32, Deziree was already diagnosed with Type 2 diabetes, high blood pressure and high cholesterol. It wasn’t until the accidental discovery of her tumor that the reality of her health became clear. “I had no idea it was there, and no symptoms,” she says. “If it wasn’t for that car accident, we might not have found it in time.” Within minutes of being told about the half-golf-ball-sized lump in her throat, Deziree was lying on a table for a biopsy.

The doctors began Deziree’s treatment with chemotherapy pills to shrink the tumor enough for surgery, and during that time she moved home to Texas to be with her family. After four months of feeling more sick than ever before in her life, the tumor—and the thyroid touching it—were removed. Over the next few months, she focused on her recovery while finishing school, but all along she knew change was coming—she set July as the date to begin her journey. “I knew that I had to make a lifestyle change. I needed to gain a better understanding of nutrition and exercise,” says Deziree. “I needed to turn around my life. I was too young.”

“I didn’t feel like I was missing anything because I was gaining back my health.
And that was more valuable to me than five dollar margaritas.”

Once July came, Deziree hired a coach to help her remain accountable for her nutrition and training. In the past, she would routinely go to happy hour three to five times a week, but the new Deziree started using that time to lift weights in the gym. She found herself becoming a little less social but knew she needed to create new habits. “I didn’t feel like I was missing anything because I was gaining back my health,” she says. “And that was more valuable to me than five dollar margaritas.”

Eventually, making healthy choices became second nature to Deziree and soon she wanted to take her newfound passion to the next level. “I didn’t want to just be told what to do,” she says. “I actually wanted to gain knowledge and expertise.” So in 2014, after becoming a certified personal trainer herself, she opened her own gym in downtown San Jose, California. That same year, Deziree also began competing in fitness competitions in the Figure category, where she qualified nationally, but says that for her, competing is more of an added bonus than a focus. “I used to be all about aesthetics,” she says. “But I finally have realized that it’s not all about looks. I want to see how strong I can be.”

Today, Deziree, now 36, is not only cancer free, but she no longer has diabetes or high blood pressure. In addition to being a personal trainer, she has earned her CrossFit Level One certification and is currently in school to become a registered dietitian. Her gym, DeziFit, offers classes, nutritional guidance and personal training, both virtually and in person. For Deziree, her clients are a huge source of motivation. “In order for me to be there for them, I have to take care of myself.”

Her mission is to use her experience to inspire others to live a healthy life now, before they end up with a health scare in the future, like she did. “Cancer saved my life,” she says. “If they hadn’t found the tumor, I might have never changed my ways.” 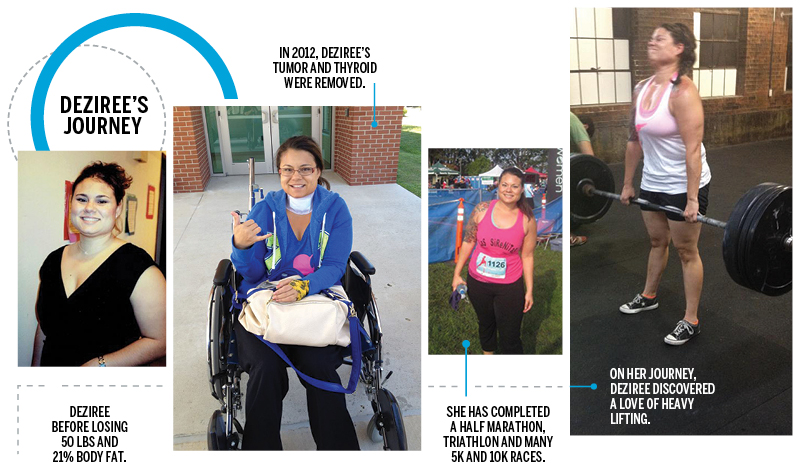