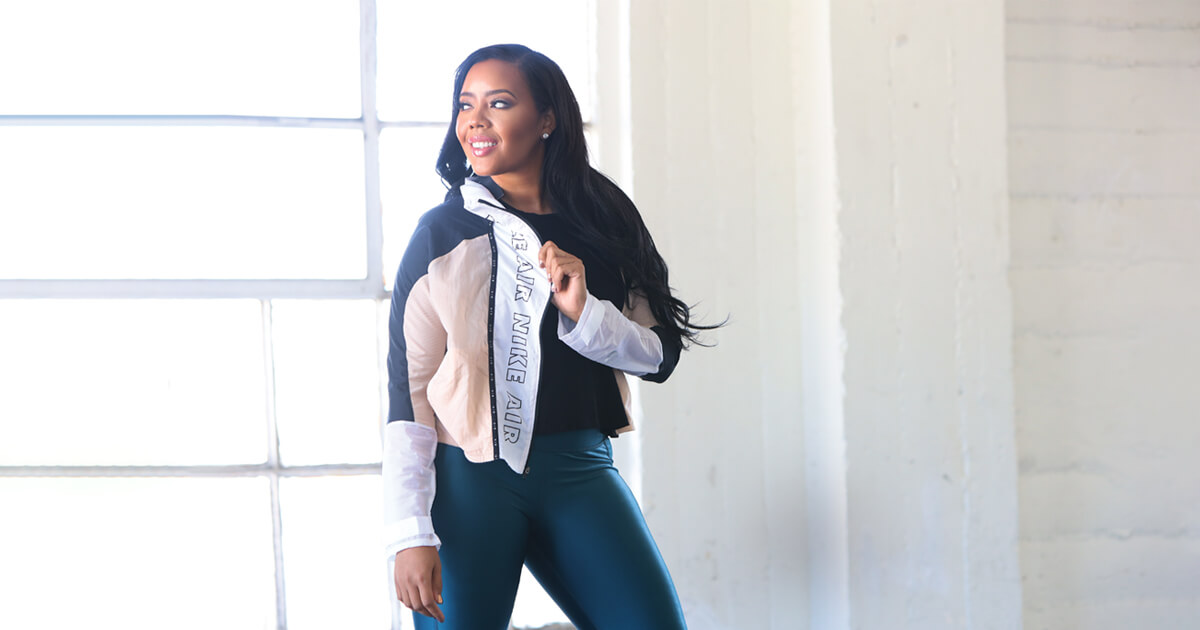 It’s 12:30 p.m. on a Tuesday and Angela Simmons is at home. Had it been just two months prior, she likely would have been somewhere else: A meeting, the gym, a photoshoot, maybe the spa. But on this April day in 2020, the COVID-19 pandemic has put the world on pause, and so she’s at her New Jersey home with her three-year-old son.

As an entrepreneur at the helm of multiple brands and business ventures, it’s not something she’s used to, or particularly fond of. But she’s making it work. “I’m always on the go and rarely at home, unless it’s with my son,” she says. “But I’m adapting for now to being indoors and working. And I’m grateful that I’m well and my son is well.”

To say she’s adapting is an understatement. Not only is the 32-year-old single mother managing her businesses from home, including (but not limited to) her fitness brand, Built Not Bought, her women’s empowerment app Purpose, and most recently, her own skincare line, Simmons Beauty, but she’s also launched an initiative to support local healthcare workers, delivering hundreds of masks and meals, and even live-streamed music, to those on the front lines. As if that’s not enough, she co-hosts weekly at-home workouts alongside transformation coach Yusuf Myers on her Instagram Live, a platform that’s gained a following of almost seven million users.

A killer work ethic is something she comes by honestly—as is being in the public eye. The daughter of 80s hip hop pioneer Joseph Simmons (a.k.a. Reverend Run) of iconic group Run-DMC, Angela has had her share of time in the spotlight. Many of us first met her as a teenager on Run’s House, a popular 2005 MTV reality show depicting the life of her father and their family. The show lasted six seasons and even spawned the spin-off Daddy’s Girls, on which she also co-starred. Now, she is executive producer and star of WE’s Growing Up Hip Hop, a reality show about life as hip hop royalty.

But in spite of her famous upbringing, Angela has made a name for herself beyond the Simmons legacy, making her mark in the fashion, fitness, and entertainment industries. With a lifelong interest in fashion and an intuition for business, she felt suited for entrepreneurship by the time she was 20. Her foray into business began more than a decade ago, when after briefly studying fashion in college, she and her sister Vanessa designed and launched their own footwear brand, Pastry. “I knew at an early age that I wanted to be in fashion, I wanted to be in that industry,” she says. “But my focus has changed as I’ve changed and evolved as a woman.”

Her evolution in womanhood goes beyond just business goals—her mindset has shifted when it comes to body image, too. “As a teenager, I struggled with body image. As a grown woman, I’ve learned to embrace everything about me. I’m proud of who I am and I love everything about my body.”

Having dealt with negative criticisms all her life and on social media, particularly when it comes to the topic of her body, Angela says she just tunes it out. “People are always going to have opinions about you. I’ve learned not to care. I do what makes me happiest, and just don’t listen to it.”

Not that she hasn’t struggled. In fact, Angela first discovered fitness when she was 19 and living in LA, and wanted to get fit in hopes of changing her negative relationship with her body. Working with a trainer, she learned the ropes, and soon she was following a strict diet and doing two-a-day workouts to hit her goals. 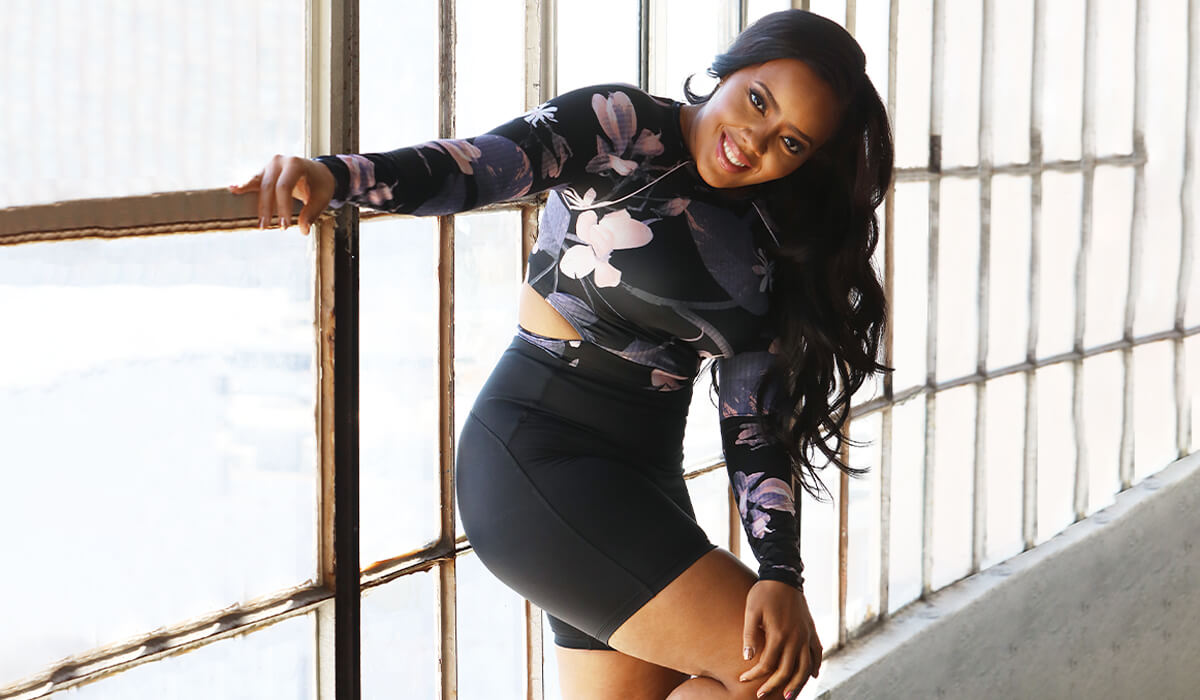 Since then, fitness has stayed a constant in her life, but, she says, her approach has shifted to a less intense schedule, especially since becoming a mother. “My priorities have changed. I still work out every day for my mental health. But your kid becomes your everything. It changes everything; it changes you.”

Still, Angela is more confident and happy with her body than ever, overcoming struggles and negativity when it comes to body image. “I’m proud of my body, I’ve never had surgery. It’s great if that’s what you want, but I believe in loving yourself as you are first.”

On that note, her fitness brand, Built Not Bought, is built on similar principles. The online workout program for both beginners and more advanced exercisers encourages a meaningful and healthy lifestyle, rather than an unattainable goal. “I just want people to feel their best, and be confident where they’re at,” she says. “People feel like you have to be in a certain place to be confident, like having a six-pack or losing 10 lbs, but it’s about having the confidence now, working through your insecurities, and being confident in this moment and allowing that to speak for itself.”

Her energy, though, isn’t solely reserved for business endeavors. A passionate philanthropist, Angela dedicates much of her time to her charitable organizations, such as GirlTalk Takeover, an event that mentors young girls to help them accomplish their dreams and make changes in their communities, and Pressure Makes Diamonds, a series of women's empowerment events for millennial and teen girls. She’s also currently working on the opening of Angela’s Angels, a non-profit with a mission to provide resources and education to those who need it to become self-sufficient in society.

That passion, Angela says, is something she’s felt all her life. “I’ve always known that my purpose is to help others. I’ve found that inspiring, and helping others has been what I’ve done since I was younger.”

It’s also part of the inspiration behind her Purpose app, which she launched in March of 2019. The app connects a network of women so they can support and empower one another in fitness, business, and motherhood. “I really believe in everyone walking in their purpose. Because if you’re not, you’re kind of just walking in circles,” she says. “I wanted a place where women can come and get motivation. I love supporting entrepreneurs who need a platform, so I’m big on extending my own platform in order to help them.”

But while she’s busy helping others, she still carves out time each day to take care of herself. For Angela, self-care and fitness are non-negotiable for keeping her both mentally and physically strong. No workout is off the table, as long as it makes her feel good. “I box, I do yoga, I spin, I  strength train. I’m the person who likes to try everything because I just enjoy how it makes me feel.” Of course, with gyms closed during the pandemic, she’s had to take her workouts indoors, but is making do with bodyweight and resistance bands (pick up our May/June issue for her quarantine workout). “As a mom, I’ve always known that I could get it done at home, but I do miss the gym. It just inspires me more.”

Did you miss this issue? Grab your print or digital copy here!