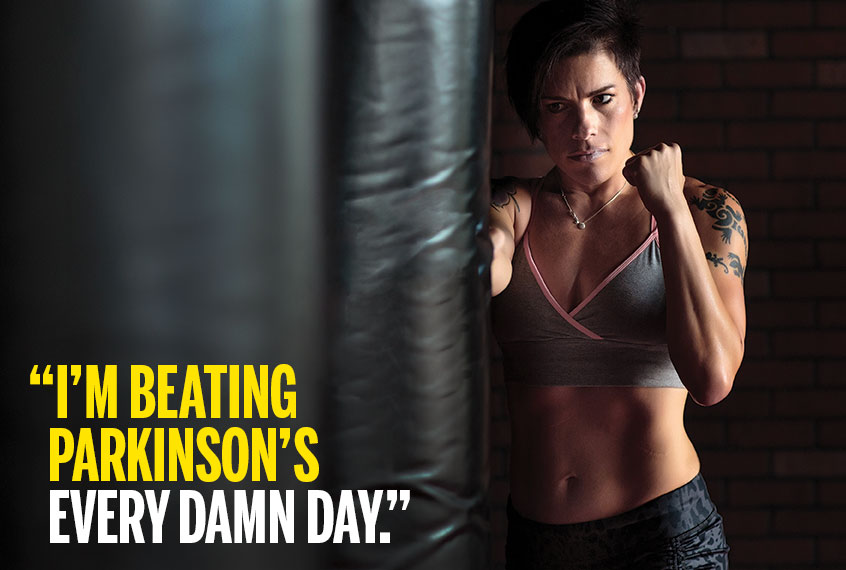 Diagnosed with a degenerative disease at 41 years old, Alison Sheltrown is proving that the only thing that defines her, is her.

“It all started with pain,” says Alison Sheltrown, pinpointing the moment when her body first tried to tell her something was wrong. It was the middle of 2011 and the then 38 year old was training heavily in Krav Maga, a style of self-defense. Accustomed to feeling beat up from the intense training sessions, she barely gave the pain in her right shoulder a second thought.

But she couldn’t ignore it forever. Refusing to give up on her training and even earning her black belt in Krav Maga in 2012, Alison continued to live with pain. The aching in her right arm intensified, eventually turning into tremors that hindered her ability to do daily tasks like writing or applying makeup. “I would have to use my left arm to brace myself as I brushed my teeth or put on mascara,” she says.

Finally, in early 2013, an MRI revealed a herniated disk in her neck that required diskectomy surgery to remove the damaged part of her spine. The procedure should have been the end of her suffering, but when she moved from California to New York a few months later, the pain in her arm followed. “It kept getting worse,” says Alison. “No matter how active I was or wasn’t, it was there. I remember thinking, ‘I guess I just have chronic pain and have to deal with it.’ It was a scary thought at 40 years old.”

Things started getting really scary when she met with an orthopedic surgeon to follow up on her recovery from the operation, and upon hearing about her persistent pain, he referred her to a neurologist. “A neurologist? But my arm hurts!” She remembers thinking. “It made no sense to me.” But after just one exam with the neurologist, Alison’s mysterious pain was becoming clearer. She had two more MRIs to rule out all other possibilities and on December 18, 2013, she was told she had Parkinson ’s disease. “I’ll remember that day forever.”

Parkinson’s is a degenerative disease that destroys the cells of the brain responsible for dopamine production, causing a loss of movement and motor skills. Its more obvious symptoms are shaking and rigidity. For Alison, who had just turned 41 the month before, the diagnosis took time to sink in. “My boyfriend and I went to dinner that night and afterwards I broke down. I cried. I was scared,” she says. “But once the initial shock wore off, I was relieved, in a way. I finally had an answer.”

She was even more relieved when the doctor informed her that she would soon start to feel normal again. The medication for Parkinson’s, which produces synthetic dopamine, would free her of the pain she had lived with for years, and allow her to enjoy training again. In fact, working out wasn’t just encouraged, it was mandatory. “Exercise, particularly intense exercise with weights, helps our brains better utilize dopamine and slows the progression of the disease,” says Alison. “It improves balance, gait, muscle stability and even cognitive issues. And the feeling of doing something you thought you couldn’t? There’s nothing like it.”

On January 7, 2014, three weeks after her diagnosis, Alison signed up for her first CrossFit class—and never looked back. “I found an amazing community and the intense, sweat-dripping workouts I love so much.” Today, she also cross trains with kickboxing, and loves competing in adventure and obstacle course races. She’s shed 15 lbs and 8 percent of her body fat, to which she credits for the fact that she’s never had to increase her medication dosage. She still suffers from painful cramping (know as dystopia) from time to time, and says even now her hand writing can be difficult to read—but she doesn’t let the disease define her. Alison says there’s no question about it: despite Parkinson’s, she’s in the best shape of her life at 42. “When I was diagnosed I made a decision. I could bury myself into a deep hole of depression. I could lie down and quit, and let myself be beaten,” she says, “or I could appreciate every day that’s good, and I could choose to be happy. I wasn’t ready then, or now, to let Parkinson’s beat me. I still have a lot of living to do.”