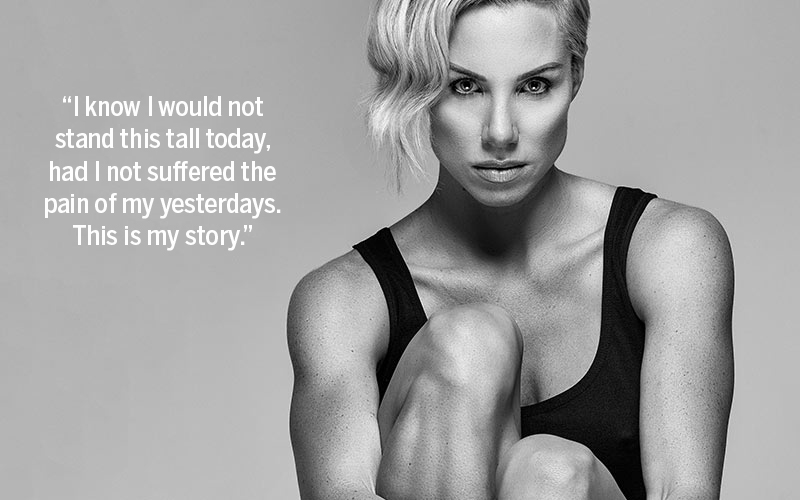 For as long as I can remember, I’ve had a strong internal fire—a perpetual yearning to push and challenge myself. At times, this fire has driven me to success, at others, it led me to some dark, unhealthy places. What I’m about to share with you is incredibly raw. These memories are painful and only through years of self-work have I been able to come to terms with them. But I share them with you now in hopes that some of you will identify with my story, and perhaps find strength and comfort in knowing you are not alone.

Hungry to Be Thin
At six years old I was already a competitive gymnast, with a naturally athletic build. Others would comment on my muscular physique, which led me to develop an extreme self-consciousness about my body at a young age. Over the years, increasingly, I wanted nothing more than to disappear and just be the girl that didn’t stand out.

By the time I hit my pre-teens, I was enthralled with the supermodels of the 90’s, and constantly compared myself to their tall, slender bodies. My desire to look like them consumed me, until I began restricting my calories in an effort to starve the muscle from my already small, 100-lbs frame. My weight began to drop. I watched the needle on the scale as if it were a lifeline to a world to which I so badly needed to belong. Eventually consuming only iceberg lettuce and drinking water over the course of an entire day, I discovered a means of having complete control — a feeling of power.

My parents worked full time and did not immediately take notice of what was going on. I’d discovered ways to conceal my behavior, wearing oversized clothing and meticulously moving food around my plate to make it look like I was eating. I thought I could get away with it, but eight months later, weighing a meager 85 lbs, there was no more denying my illness. My parents had become suspicious and threatened to hospitalize me if I refused to discontinue my behavior. Reluctantly, I agreed to get professional help.

Getting Healthy
I went through a depression, mourning the weak, sickly body I had valued as an accomplishment. But in working with a therapist, I slowly began to heal and eventually, I wanted to get healthy. I stopped obsessing over achieving a certain number on the scale, and instead, sought to gain a better understanding about health through fitness.

I discovered weightlifting in high school at the age of 16. I joined a gym and hired a trainer to teach me proper form and technique, and as my passion grew stronger, so did my body. Before long, getting skinny was no longer the objective — obtaining power, strength and confidence became my ultimate goal. By the time I turned 18, I was healthy both in body and mind, and felt in control of my life and the direction I was headed.

“On one occasion, he pointed a loaded gun to my head. I wanted out.”

Fighting My Demons
I wish I could say this was where my story ended, with me being healthy and happy. But my old insecurities were still hiding deep within me, waiting for an opportunity to steal my power again. During this time, I began dating an attractive, successful man who was eight years older than I was, and I was completely infatuated with him. But it was anything but a fairytale romance. As time went on, his own demons began to show themselves. We fought constantly. If I’d get attention from other men, he would verbally punish me for it. He would put me down, then beg forgiveness, and the cycle would continue.

Eventually, his verbal abuse evolved into more aggressive, physical behavior. Our fights became violent, often involving him pushing, shoving and throwing me around. On one occasion, he pointed a loaded gun to my head. I wanted out, but each time I tried to leave, he would promise to change and I told myself this was his way of showing love. Friends and family begged me to get away from him and finally, after getting a restraining order, meeting my future husband and moving over 2500 miles away, I did.

Stronger Than Yesterday
The emotional damage from that three-year relationship was not easy for me to overcome. I credit my now husband of nearly 16 years for teaching me how to communicate, and for showing me that real love doesn’t hurt. It doesn’t hold you down — it lifts you up. My weak links needed repair and I was dedicated to making that happen. It was the beginning of my transformation from a scared little girl, into the strong woman I am today.

Learning to love myself, and that I deserved love, was the hardest, most worthwhile battle I have ever fought. Even though I had hurt my body in my youth, then allowed another person to hurt me as a young adult, I understand now this was part of my evolution and learning process. I would not stand this tall today, had I not suffered the pain of my yesterdays. I now affirm myself with daily positivity, chase the things I am passionate about and love the person I have fought so hard to become. Though difficult, I now embrace those dark moments of my past as they have allowed me to shine more brightly today.