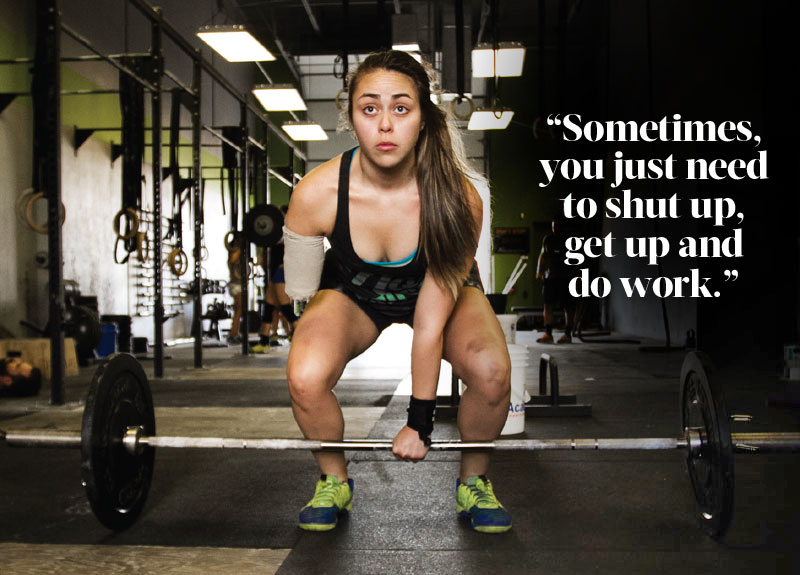 After a car accident took Krystal Cantu’s right arm, she rallied her
inner athlete and came back with a vengeance.

When the doctor  told Krystal Cantu that her right arm would have to be amputated following a serious car accident back in 2013,  she had an unusual reaction:  “I thought myself very lucky.”

Of course, she was  devastated. Obviously, she  was scared. But the 24 year old (now 26) was used to being challenged physically and pushing her limits: she was a CrossFitter, after all. “CrossFit showed me that I was capable of so much more than I ever thought. It always left me out of breath, and that’s exactly why I wanted more.”

Krystal got into CrossFit  just four months before her  boyfriend’s car blew a tire  during a weekend road trip, causing the vehicle to roll,  ejecting her arm out the window, nearly severing it. With her limb crushed above her elbow, Krystal’s mind immediately activated  survival mode and, as she  laid on the grass listening to first-responders throw questions  at her, she thought back to the strong will she developed through CrossFit, and repeatedly told herself that she was going to pull through. And so, as she stared back at the doctor in the hospital after hearing the news that her arm could not be saved, Krystal chose to count her blessings, rather than dwell on the challenges ahead. It would be a rough road, but the amputation meant that she could walk away with her life, the support of her loved ones, and a love for her sport.

With the grit of a woman who spends her free time flipping car tires and snatching weights over her head, Krystal returned home from the hospital with a goal of living her life as normally as she could, no self-pity allowed. “I did the same things as I did before,  just with one arm now,” she says. Krystal put on her makeup, got dressed in the morning, and tidied up her apartment on her own, independent as ever. Having competed in the Tough Mudder and Spartan Races prior to the accident,she continued to go for trail runs. She met with a coach who helped her to re-learn  and adapt CrossFit movements to her new body, and provided her with a game plan for  getting her endurance back  up. “If I find something that  I love, I give it more than my  100 percent,” she says.

When her doctor cleared her for action one month after the accident, once the incision in her arm was completely sealed, Krystal was back into training, learning how to perform deadlifts and overhead lifts with one arm.

“I want to be recognized for my athleticism,
and not the fact that I am missing an arm.”

Three months after her accident, Krystal competed in the Working Wounded Games, meeting other adaptive CrossFit athletes who also had one arm, and who shared her spirit and fearlessness. Although a back sprain kept her from finishing the competition, she was inspired by her fellow competitors, all of whom continued reaching for their athletic best, without letting their injuries define them. Since then, Krystal has entered “as many competitions as [she] could,” including non-adaptive events where she’s faced off against women who don’t have disabilities. “I want to get better and better,” she says. “I want to be recognized for my  athleticism, and not the fact that I am missing an arm.”

Despite obstacles, like a recent foot injury that required surgery and limited her workouts, Krystal continues to inspire her friends, family, and more than 17,000 Facebook fans who see her story as a true testament to the power of a positive attitude and determination to never give up. “The minute you tell yourself you can’t, you won’t,” she says. “But staying strong no matter what life throws at you will help you push through the dark days. You can come back with a vengeance.”

And she did. Soon after  her foot healed, Krystal reached a new power clean PR of 110 lbs., crushing her past lifts, including those before her amputation. As if that’s not enough, she’s also a Paralympic hopeful, currently training to qualify to represent Team USA at the Rio 2016 Summer Games in the javelin event. She often posts photos and videos to her social media of her latest accomplishments in the gym with the same no-B.S. attitude that’s made her a role model for anyone, with or without a disability. “Sometimes, you just need to shut up, get up and do work,” she comments on one such post. “You have two choices in life,” she says. “You can either sit and fear everything, or you can accept everything as a blessing, fear nothing, and be incredibly happy.”