Home Motivation Get Inspired How This Paralympian Found Her Purpose 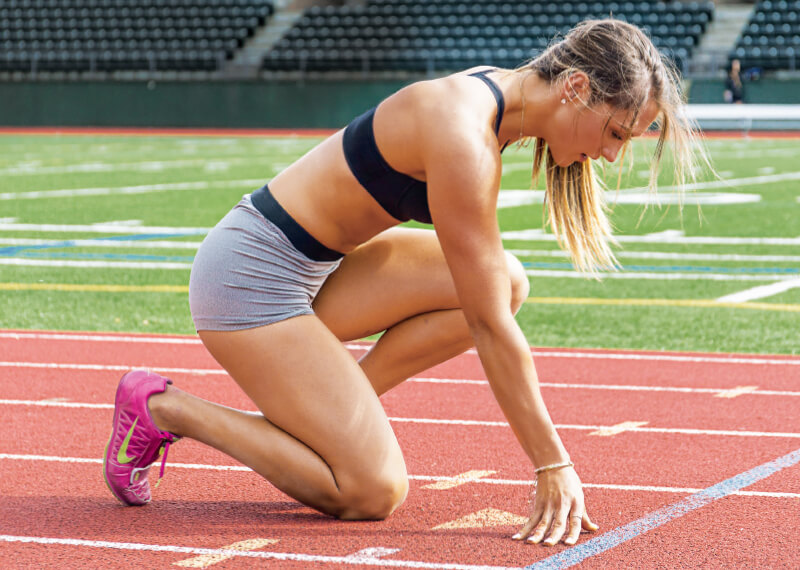 On December 28, 2009, avid high school wrestler and track and field athlete Megan Absten was with a group of friends riding ATVs in a gravel quarry in Burlington, WA. A sharp turn tipped her vehicle onto the driver’s side, and she instinctively reached out her left arm as the half-ton machine fell to the ground, pinning her shoulder under the roll bar. Her friends rushed over to lift the ATV off her, but she lay there for 30 minutes until the ambulance arrived that would rush her to the hospital. “My life didn’t flash before my eyes, I didn’t think of what was going to be left unsaid. I just knew I needed to survive. I knew this wasn’t the end of my story,” she says.

After 40 consecutive hours of surgery attempting to save her arm, which had almost completely severed, Megan waited for seven days to see if there would be any response. “At that point, doctors told me any more transfusions could kill me,” she says. “They’d need to graft nerve, skin, and muscle from other parts of my body, and it would mean another two months in the hospital. There would still be a high probability that my arm wouldn’t work. I had a choice, but at that point, my life was more important than my arm.” So at 14 years old, Megan made the decision to amputate her arm at the shoulder. A few weeks later, she was discharged from the hospital.

The following years were the most depressive time in Megan’s life. A naturally independent teen, suddenly requiring assistance from others to complete even the most basic tasks was excruciating. “I thought I’d pick up where I left off, start wrestling again, and prepare for the track season,” she recalls. “But I quickly learned it wasn’t going to work that way. I was existing in a completely different body that I had no experience with.”

After alienating herself from those around her and withdrawing so aggressively from her studies that she was no longer on track to graduate, Megan enrolled at a boarding school where she could start fresh. While it meant having to re-take her junior year, attending Annie Wright School in Tacoma, WA was a turning point for Megan. She went from a cumulative GPA of 1.8 during her first year to a 3.6 at the end of senior year, and was introduced to the notion of reclaiming her independence in another way: the Paralympics. 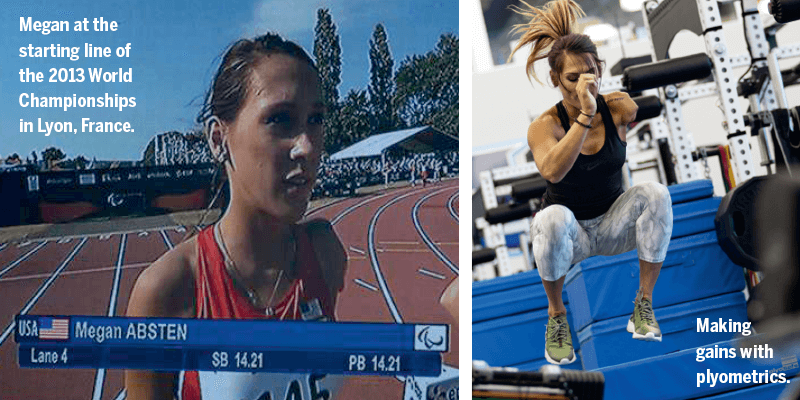 “The adversity I went through made me better.
I was setting personal records like crazy.”

Losing her arm meant adapting to imbalances which trainers helped to improve. When she crossed paths with a retired Paralympic track coach who encouraged her to face adversity, she registered for the 2013 Paralympic National Championships in San Antonio, TX, and to her surprise, ended up qualifying for the World Championships in France held later that year. “I had never known a life without sports,” Megan begins. “I learned I would never be the same athlete, but the adversity I went through losing my arm made me better. I was setting personal records like crazy.”

Although she didn’t make the podium, competing in France awarded Megan an intangible feeling. “I remember coming home from that trip and feeling euphoric. For the first time since I had lost my arm, I felt I had a purpose. I knew that this was what I wanted to do with my life.”

Knowing she needed to up her training game if she was going to reach her goals, Megan enrolled in the IMG Academy, a prestigious sports training school, where her hard work paid off as she qualified for the 2016 Games in both track and long jump, but a ruptured Achilles would keep her on the sidelines as she cheered on her teammates.

Now, Megan’s sights are set on competing at Tokyo in 2020, training six days per week with the pro-Olympian group at IMG Academy both on the track and in the weight room (her back squat is an impressive 225 lbs). Her Instagram account reaches 30K followers, and she constantly works to expand her voice in the adaptive community with motivational speaking events and promoting an adaptive clothing line. “Now that I’m a professional athlete, I can give guidance and introduce others to adaptive athletics. It always feels good to be part of something bigger than yourself, but that feeling is amplified within a network of people who are growing through the same things you did.”