Home Motivation Get Inspired “I’m Dreaming Bigger Than I Ever Have Before.” 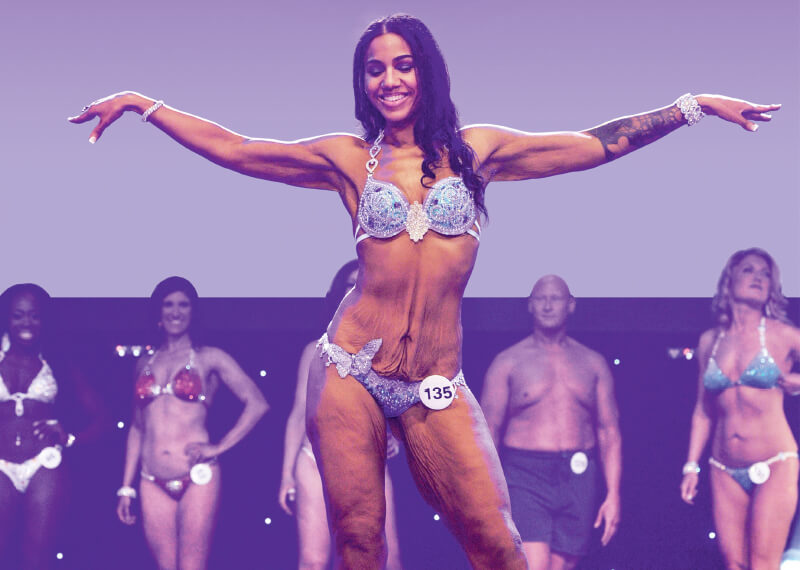 The weight was a symptom. Katie Bolden had a host of other symptoms too, but the weight was an accumulation of all that ailed her.

Within a four-year period, she had been diagnosed with pre-diabetes, infertility, manic depression, anxiety, polycystic ovarian syndrome, and glaucoma. An especially frightening episode occurred in 2012, when Katie experienced optic neuritis, leaving her temporarily blind in one eye while dealing with muscle spasms, temporary paralysis, and alternating numbness and tingling in her extremities—early signs of what doctors pre-diagnosed as multiple sclerosis. But Katie wasn’t just living under the thumb of appointments, medications, and the invisible hardships of mental illness—she had also reached her heaviest weight: 280 lbs.

She was miserable. As an overweight child who grew up in a negative, verbally abusive household, motivation and drive weren’t attributes that Katie fostered. She became withdrawn and antisocial; tasks such as grocery shopping and holding conversations were sometimes impossible. The mental health diagnoses helped Katie feel less alone, but the weight persisted. “It took hitting rock bottom to really start getting serious about making changes to better my life quality,” she says. “You could say I was scared straight.” Along with the optic neuritis episode, Katie was moving from Hawaii back to her home state of Illinois. She explains that when she first left home she was already morbidly obese, but had now put on even more weight. “I became petrified thinking about what my family would think when they saw me again,” she says. The realizations hit all at once, but the changes to her health happened gradually.

Katie celebrating a win
with her family.

A day at the beach with
her daughter.

In 2013, 26-year-old Katie planned her own weight loss program, enlisting the help of apps and YouTube videos. She followed the balanced 80/20 rule (eating clean 80 percent of the time), focusing on macro intake, and allowing herself the occasional cheat meal each week, but she eventually progressed to craving treats just a few times each month. After a 40-lb setback during her pregnancy with her daughter, a conception three years in the making paired with multiple unsuccessful fertility treatment attempts, Katie has, to date, lost 150 lbs. She had always felt empowered by journaling, and this undertaking was no different. Her blog, Huff ‘n Puff to Buff ‘n Tough, began as a sort of diary, keeping her accountable and providing a place to connect with others that were on the same path. “The blog evolved over time. At first, I was looking for motivation and inspiration from others. Now, I motivate and inspire [my readers]. It’s mind-blowing,” she says.

“Working out lessens my anxiety, gives me confidence,
and helps with my depression.”

Her Instagram page has since reached over 30K followers, and she’s not afraid to bare it all in her photos, which are complete with stretch marks and loose skin. Her followers leave comments ranging from asking for fitness advice to crediting Katie as the reason they’re able to continue working towards their own lofty health and fitness goals.

Since her weight loss, many of Katie’s medical concerns have diminished, and she now manages her mental health without the use of medication. “Working out lessens my anxiety, gives me confidence, and helps with my depression,” she says. “I was able to build myself up enough to be able to step on the competition stage and present my physique—something I never thought I’d be able to do.”

This past April, Katie, now 30, denounced her fears, and competed in the WBFF Fitness Atlantic USA Championships. Not only did she win her division, but she also qualified to compete in  the WBFF Worlds in London, England (at press time, she announced she would not be competing). “Growing up, I was so afraid of anything that required me to stand up in front of people and present something,” she says. “Now, so many things have changed.”

Katie has found new ways to challenge herself off the stage as well, competing in half marathons and obstacle course races. “Life is amazing after my weight loss,” she says. “I have more energy. I’m setting crazy goals for myself. I’m dreaming bigger than I ever have before.”