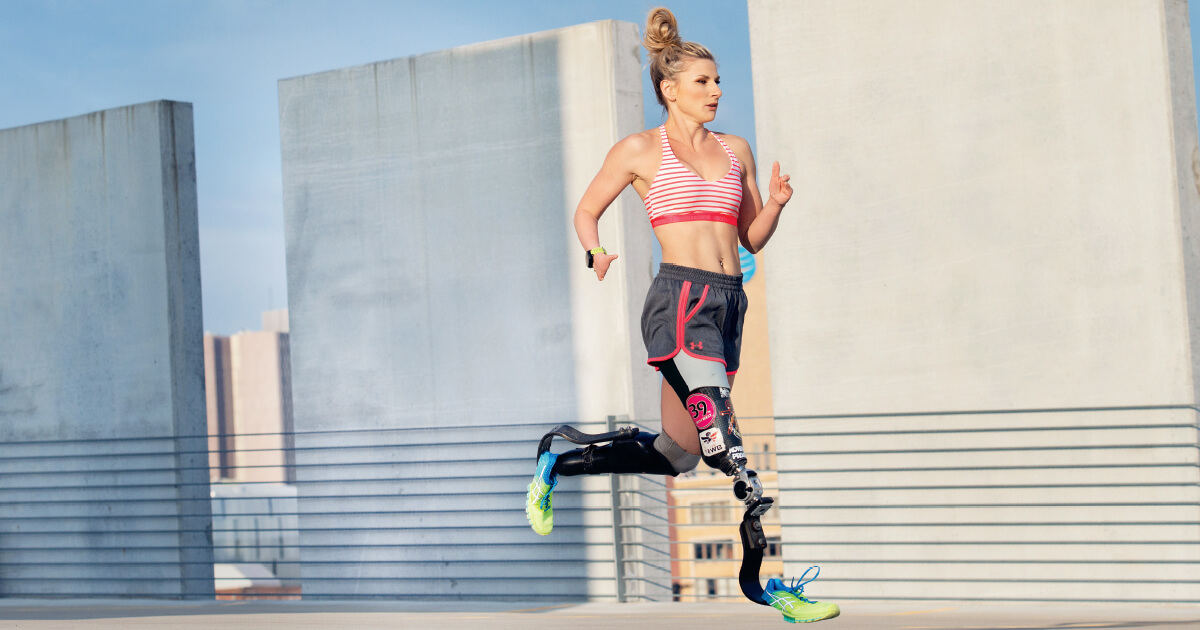 In April of 1986, a series of industrial mistakes in Ukraine created a chain reaction of explosions, triggering a fireball and subsequent fires which would catapult large amounts of radioactive material into the atmosphere to be transported hundreds of miles away from the ground zero explosion site. Still regarded as the worst accident in the history of nuclear power generation, the aftermath of the Chernobyl disaster resulted in hundreds of cases of radiation sickness, cancer, and concern for the children born following the event.

According to official post-Soviet data, about 60 percent of the wind-carried radioactive materials settled in Belarus, where Tatsiana Khvitsko (Tanya) was born in 1990, without legs or fingers.

While she attended a Belarussian boarding school and spent most of her early life in Belarus, Tanya took part in medical procedures in the US beginning when she was seven years old to receive prosthetic legs and braces, and meet with doctors. Tanya felt comforted by the warm welcome she received from the States each time she visited, and in 2008, she became a permanent citizen.

Settling in Kansas City and attending college, Tanya was given her first pair of running blades during her senior year. Adaptively active as a kid, the blades allowed her a new sense of freedom. “I liked the feeling of going fast—that feeling of flying,” she says. Realizing she was running well, Tanya participated in races and was determined to improve her time. “I loved racing because I could meet other runners, maybe even an amputee, and be able to encourage them.”

To date, Tanya has participated in multiple 5K and 10K races, seven half marathons, and two full marathons. Her first marathon attempt in 2017 left her disappointed when at mile 20, she collapsed from dehydration. “That marathon was so hard,” she says. “I could have made excuses to not try again, but I wanted to finish it. I wanted to be called a marathoner.” Training through Kansas City weather, through snow, slush, ice, and rain, Tanya was determined to see the finish line at her next marathon. And she did. With a time of four hours, 30 minutes, and 26 seconds, Tanya conquered the 2018 Go! St. Louis Marathon. 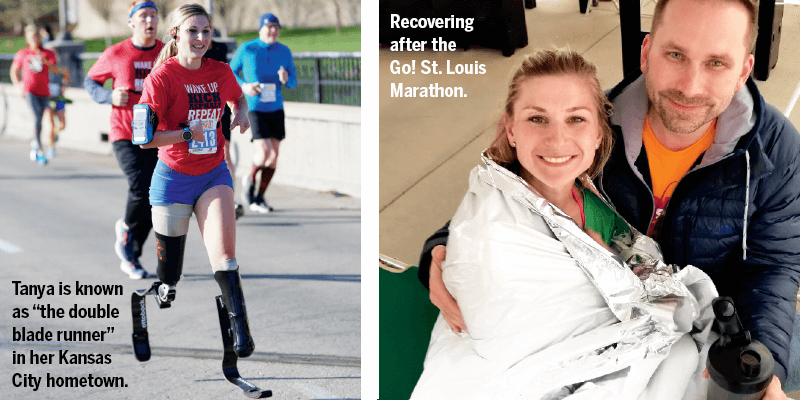 “I want to be seen as more than a girl running on two prostheses.”

Tanya trains with a running team where she completes hill and speed courses. She also lifts weights, cycles, and has recently taken up swimming, all of which she says make her a faster runner. After completing the marathon, she’s now taking some down time to rehab a nagging hip flexor injury and work with her chiropractor to strengthen her body mechanics. Tanya works with Girls on the Run, a community organization that leads third- to eighth-grade girls through discussions, games, and activities to usher them into a lifetime appreciation for health and fitness, culminating in a 5K race. “It’s so important to me to inspire young girls who struggle with self-esteem and confidence,” she says.

Tanya knows she turns heads in her hometown and in races. “I’m well known here in Kansas City as the double blade runner,” she says. “But personally, I want to be seen as more than a girl running on two prostheses. I’m not trying to be an inspiration for others—I’m just trying to be the best for myself.” She’s thankful for the love and support she receives daily from her community, but if you’ve ever bailed on going for a run, don’t tell Tanya. “That bothers me,” she says. “I couldn’t run because I didn’t have legs. Now I can’t wait to run. If you want something, get out and do it.”

Despite Tanya’s can-do attitude, it’s not always a walk in the park. “I’m always stared at. I’m always pointed at. I’m always asked what happened to me,” she says. She doesn’t love the attention, and she’ll be the first to tell you dealing with her birth defects on a day-to-day basis isn’t easy, but she recognizes that just by being an adaptive athlete, she has the opportunity to educate others on living with a disability. “I think the main thing is that running has allowed me to be more confident,” says Tanya. “Chernobyl has taken my legs and fingers, but it has given me so much more. It has given me a different perspective—to see the world from a new angle. My disability didn’t make me a weak human-being; instead, it has helped me to become a stronger person who can overcome almost anything.”