Home Motivation Get Inspired “I’m not interested in changing how my body looks.” 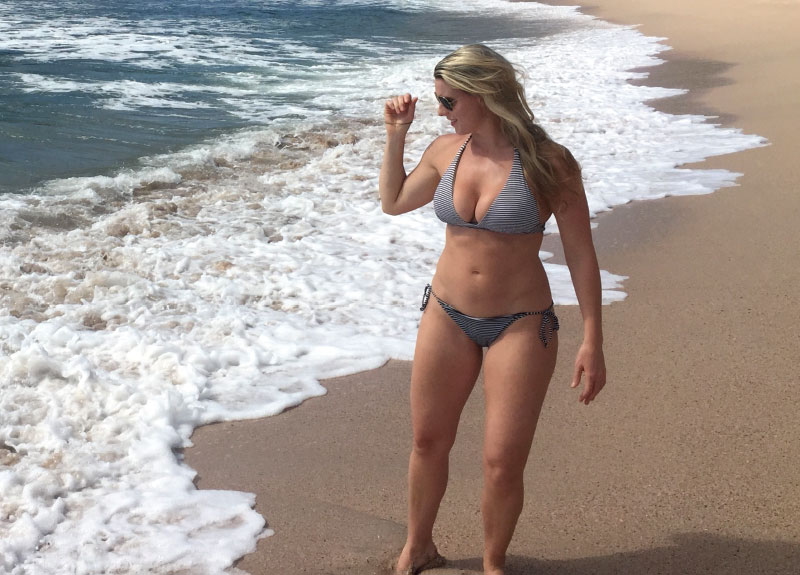 After years of struggling with her weight, Molly Galbraith is on a mission to help women love their bodies.

On New Year’s Day, Molly Galbraith sat at her computer, trying to write a Facebook post about body acceptance. As she stared at the accompanying photo of herself on a beach in a bikini, it suddenly occurred to her that for the first time in as long as she could remember, she hadn’t made any resolutions that involved changing the way she looked. That’s when it clicked. “This is my body,” she wrote. “This is not a before picture. This is not an after picture…it’s a LIFE picture.”

In the post, she revealed how she had pushed her body to extremes, leaning out for figure competitions and training for powerlifting meets. How her body had been called too fat, too thin and everything else in between. “Today, this is a body that is loved, adored and cherished by the only person whose opinion matters,” she wrote. “Me.”
Post.

Within minutes, her post received dozens of likes. A few hours later, it had thousands. And in the weeks to follow, her story would be shared more than 20,000 times, receiving attention from media outlets worldwide, including People.com to the UK’s Daily Mail online. “I love that this is the message the world picked up,” says Molly, a strength and conditioning coach in Lexington, KY, and co-founder of online women’s fitness resource Girls Gone Strong. “I also can’t believe that ‘Woman Likes Her Body,’
is international news.”

But like most women, Molly has struggled with issues related to her weight since a young age (she remembers thinking she was fat at age seven), and getting to a place of acceptance hasn’t been easy. Now, her experience has sent her on a mission to empower other women. “The best way to educate and inspire others is to tell our own stories,” says Molly. This is hers.

“I was 24 years old and felt like I couldn’t get
off the couch to get a glass of water.”

Where the Trouble Started
At 5’11, Molly has never felt totally comfortable in her skin. So when her weight hit 185 lbs in college, her confidence sank to rock bottom. In 2004 she started lifting weights with her then-boyfriend who was a bodybuilder, and decided she needed a goal to help motivate her. “I wanted to do a figure competition because I desperately wanted my body to look different.”

Molly achieved her goal of competing in 2006, but when she instantly gained weight back after the show, she signed up for another one. Soon, she was relying on the stage to be the catalyst for her weight loss. “After every competition my body would rebound,” she says. “I felt like the only way I could get my eating under control was to commit to another show.”

In 2008, Molly returned to the stage with a new game plan. Instead of her usual post-show binge, she reverse-dieted, strategically increasing her carb intake week by week. But her plan backfired. “My body just wasn’t having it,” she says. “I gained a ton of weight back and was physically depressed.” Over time, her lethargy became almost paralyzing. “I was 24 years old and felt like I couldn’t get off the couch to get a glass of water. That task seemed insurmountable to me.” The following spring Molly was diagnosed with Hashimoto’s Disease, Adrenal Dysfunction and PCOS. “I had pushed my body way too hard for way too long. And it fought back.”

The Year From Hell
For the next two years Molly focused on rehabilitating her battered body. Working with physical therapists, she improved her stability and mobility, and built a solid foundation for muscle. Slowly, she started hitting new PRs in the gym. During that time she co-founded Girls Gone Strong and was learning to manage her health problems. “I was in a place where I was feeling healthy and strong,” she says.

But it all came crashing down when in January of 2012, she unexpectedly lost her dad. “It rocked my world pretty hard.” Three weeks later, Molly hurt her back while deadlifting in the gym (an injury that would initiate two years of chronic back pain), and a few months after that, she ended a six-year relationship with her boyfriend. Inevitably, her training suffered and the weight started to creep back up. “I was feeling really down and was doubting myself. I thought, ‘Who am I to be running a company called ‘Girls Gone Strong’?” When a male coworker insinuated she was fat, it was the last straw. “I was getting really rough criticism from all sides—colleagues, community, the internet. Everyone had something to say about my body.”

“Other people’s words don’t determine my worth.”

Compassion Project
That summer, Molly took to her website to share her struggles with negative body image. It would be the first of many articles that would garner an enormous positive response from readers. “I let myself be really vulnerable and it resonated with other women who just needed to hear that they’re not alone,” she says. “That was the shift for me. I realized I don’t just want to help women feel and look good, I want them to have grace and compassion and fall in love with their bodies.”

Since then, she’s continued to be an ambassador for body acceptance through Girls Gone Strong. She says one of the organization’s top priorities is to fight “the multi-million dollar weight-loss industry that preys on insecurities” and help women realize they’re good enough without being a certain shape or size. “I think you can love your body and still set goals to look or perform differently—as long as it’s from a sustainable and compassionate standpoint.”