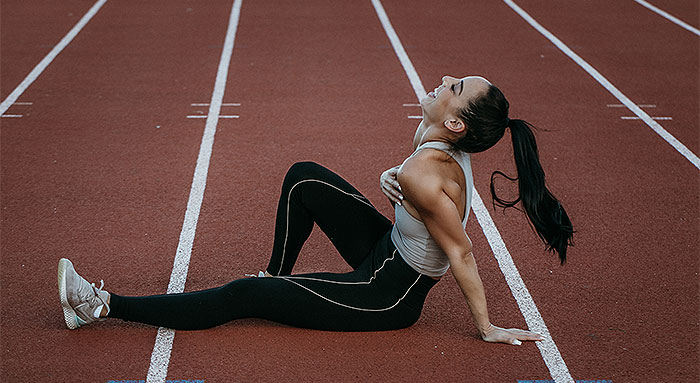 Jacqueline Kasen exudes pure joy. A powerhouse trainer, Jacqueline is the only female Global Technogym Master Educator, the founder of Get JacQd, her signature fitness class, and the smiling, laughing, and usually high-kicking instructor delivering wicked workouts on IG and at Anatomy, a Miami-based health and wellness chain.

But behind the energy and charisma, the 36-year-old’s past was anything but shiny. Now, by opening up about her dark experiences, Jacqueline hopes that her story of childhood abuse, sexual trauma, and medical complications will inspire other survivors to refuse to let their past define them. “This is what made me, but it’s no longer who I am,” says Jacqueline. Instead, she’s found a way to use her pain as the fuel to run towards a better future.

Growing up in New Jersey, Jacqueline was an all-star track and field athlete and dedicated student, and she appeared to be an overall happy kid. Little did her teachers—or even extended family—know, Jacqueline had been in a physically abusive household for as long as she could remember.

“The earliest time I can remember is at age two,” says Jacqueline. “I didn’t know the difference between what was right or what was wrong. At such a young age, you think that’s the way you receive love.”

After Jacqueline’s parents divorced when she was two years old, she and her sister split their time between their parents’ homes and were being physically abused by their mother without her father’s knowledge. “When it happens, you cry like, ‘I want my mommy, I want my mommy,’ but she is the one who did it to you,” says Jacqueline, who describes her years from age 2-12 as “a black hole.”

“Running was the way for me to get out of the house. Whenever something was bad I would say, ‘I’m going for a run’ and it was acceptable. It was a huge stress reliever.”

While her parents didn’t often speak without lawyers present, one thing did warrant a positive exchange between the two—Jacqueline’s running. When she was just four years old, Jacqueline’s dad asked her to get the newspaper from the end of the driveaway. It started to rain and she sprinted back, her father awed at her speed. He asked her to do it again, and this time, timed her.

“That was the first time I remember one parent calling the other,” says Jacqueline. “I noticed it was the one thing my parents spoke about that was positive. It made me want to excel even more.”

At age eight, Jacqueline entered and won her first race—a 200 m sprint against high school aged runners. Her training and racing intensified, keeping her out of the house and in a safe, supportive environment. By 12 years old, she competed and won the gold medal at the Junior Olympics in the 400 m sprint and long jump.

That same year, the abuse from her mother became too much. After seeing her sister take the brunt of one of her mother’s blows, she sprinted into action, running as fast as she could to borrow a neighbour’s phone four houses down the street.

Hysterical, Jacqueline called her father and told him of the years of abuse. But too suddenly, there was a knock on the door—it was Jacqueline’s mother coming to take her home.

Despite the neighbour insisting Jacqueline could stay with them until her father could pick her up, her mother insisted harder. “My heart just sank to my stomach,” says Jacqueline. “I was petrified to go home with her because I didn’t know what was going to happen.”

After her mother explained she had been only “physically disciplining” Jacqueline and her sister, the abuse stopped for the next six years. Even so, running continued to be Jacqueline’s safe zone, a way to keep her mother’s blows at bay.  “The running was the way for me to get out of the house,” says Jacqueline. “Whenever something was bad I would say, ‘I’m going for a run’ and it was acceptable. It was a huge stress reliever.”

So much so that her running became an unhealthy concern. Between travelling for meets, training, and keeping up with her school work, Jacqueline wore herself thin and ended up in the hospital for almost two months. A combination of mono, a respiratory infection, and ruptured spleen (among other complications), meant Jacqueline was out of school for a total of four months and was left with permanent lung damage.

Despite the hardships of her childhood, by age 18, Jacqueline was working on her B.S. in Exercise Science at Plymouth State University. Tensions were high with her mother once again, and Jacqueline decided to live solely with her father on school breaks. On her last trip home to pack up her belongings, the six-year stint without physical abuse ended.

“At that time, she went to punch me in the face and I turned my shoulder,” says Jacqueline. “She ended up hitting my back, not my face.” Without being able to finish packing, Jacqueline was thrown down the stairs and left her mother’s for good. “I grabbed nothing. I had nothing on me. And that was it,” she says.

“The emotion behind the physical is worse. A punch is a punch. The black and blue goes away, but it’s the emotional abuse that stays with me forever,” says Jacqueline.

The abuse followed Jacqueline relentlessly as she experienced a new form in a relationship that same year. Her boyfriend (who she had not been sexually involved with) drugged and sexually assaulted her during a visit to his college. “I can only remember all the details leading up to it,” says Jacqueline. “But the next day it was very clear that was what happened.”

Through it all, exercise continued to be Jacqueline’s outlet. She graduated, moved across the country to Miami, and began building a successful career as a personal trainer and fitness instructor. By age 34 and multiple toxic relationships later, Jacqueline was accustomed to the contrast of her energetic work life and her draining personal life.

With the help of her father and fitness mentor, Marc, Jacqueline came to a pivotal realization: “I was the common denominator.”  She decided to remove herself from the situation, focus on herself, and join some of her clients on their hike of Mount Kilimanjaro. 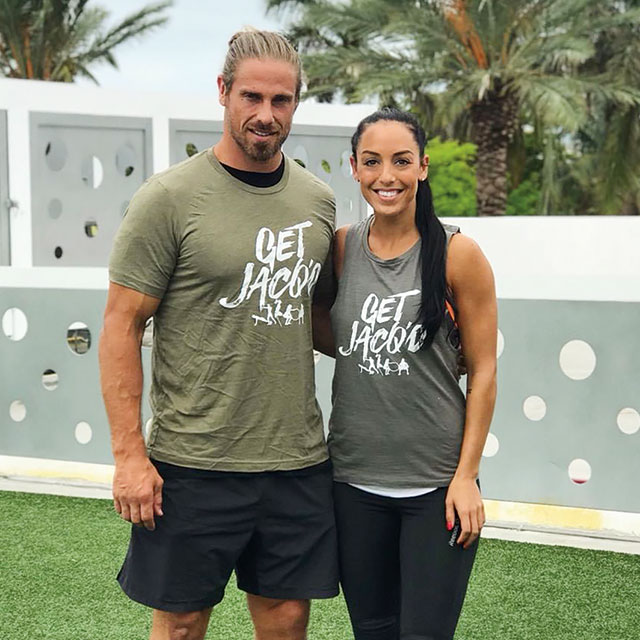 Jacqueline with her mentor and owner of Anatomy, Marc Megna. 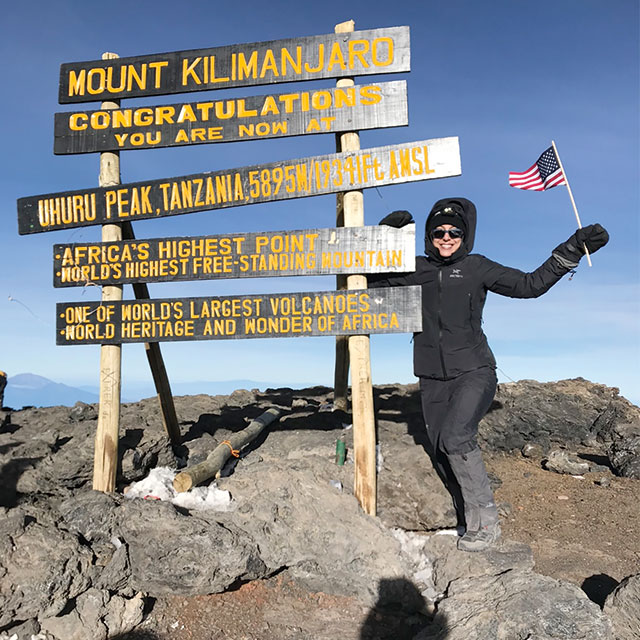 At the summit of Mt. Kilimanjaro in Tanzania, Africa in 2018 after a 15-hour climb.

Living below sea level in Miami, then summiting 19,341 ft on one of the Seven Summits was no easy feat—even for someone as fit and determined as Jacqueline. With three hours left to go in the six-day climb, Jacqueline’s pulse oxygen dropped below 60 and she blacked out. Along with extreme conditions, she was battling the limitations of her damaged lungs. “I was brushing my limit’s end,” she says.

When she came back to consciousness, her guide asked her a simple question that would put a spotlight on her unwavering determination: “Do you want to quit?” When Jacqueline responded “No,” he simply said to stop crying and get up. “It was the right coaching that I needed. It was what he said that got me up, and I was able to summit,” she says. “And that’s why I love what I do as a coach.”

Today, Jacqueline takes that love of coaching in full stride as director of group fitness at Anatomy as she actively builds safe online and in-person fitness communities. Along with recently coaching for Sports Illustrated’s swimsuit model search, Jacqueline is sought out by brands of the likes of FITBENCH and Isopure. Any free time she has is dedicated to training to complete the Seven Summits—Jacqueline plans to summit Mount Aconcagua later this year.

Despite the hurdles,  Jacqueline continues to sprint through life bringing joy to as many people through fitness as possible—strangers included. “People never knew what I was going home to,” Jacqueline says of her childhood. “You never know what people go through in their day. So kill them with kindness—that might be the only love they are going to get that day.”