Home Motivation Get Inspired How My Fitness Changed After Breast Cancer 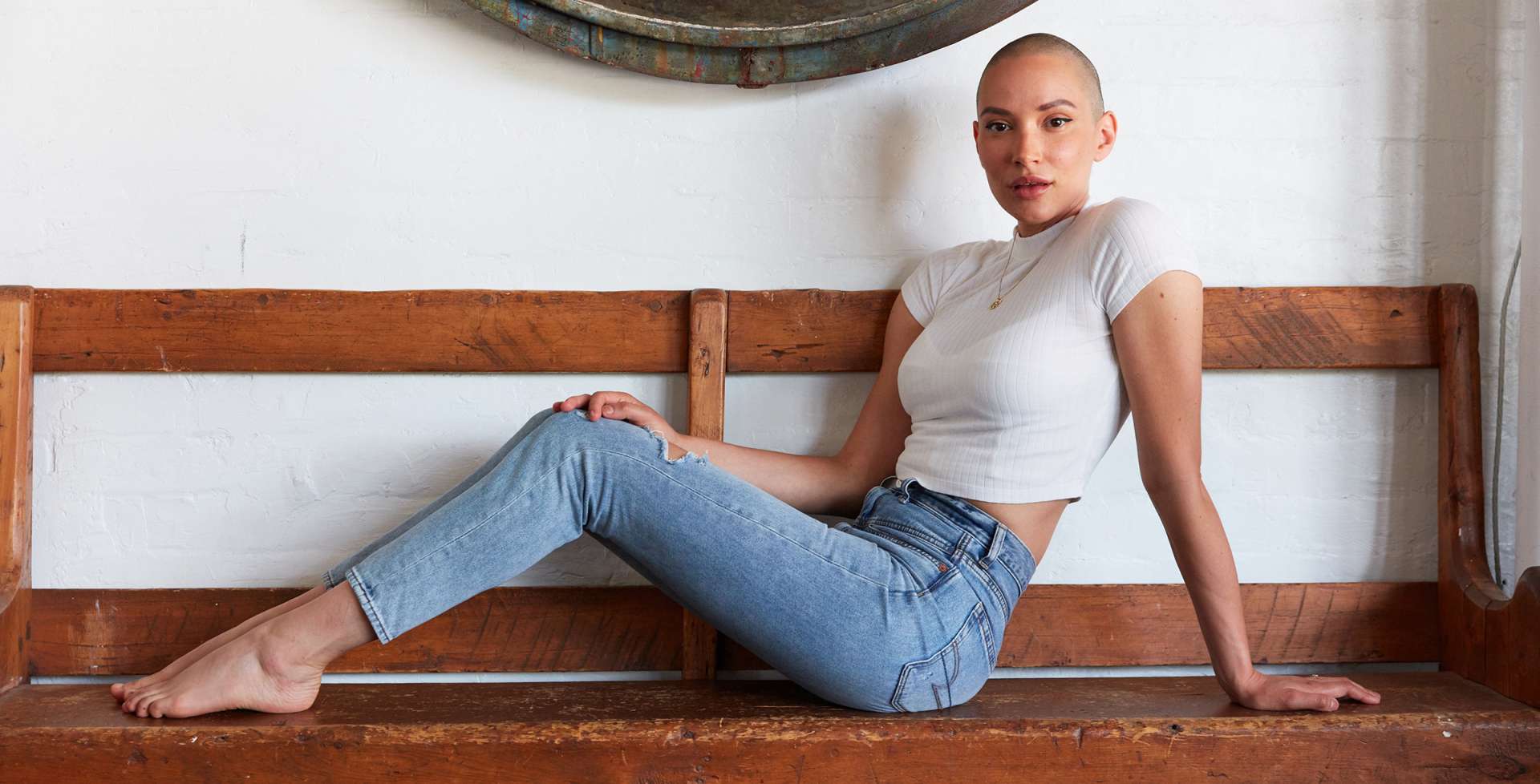 Breast cancer treatment can take away many things, from hair and breast tissue, to energy and confidence. But for Brittany Churchill, a fitness influencer and model, she refused to let her diagnosis take away her love of working out. While chemotherapy wouldn’t allow her to exercise as intensely as she was used to, Brittany didn’t mind having to make some modifications. “It’s not important to me to be able to do certain exercises,” she says. “It’s important for me to feel strong.”

It was October 2018 when Brittany heard the news that would change everything. She knew of the lump for five years, but it wasn’t until her doctor was on leave and the replacement doctor suggested an ultrasound that she was diagnosed with stage-2 Invasive Ductal Carcinoma. She shared the news with her Instagram followers three months later as they followed her through her fight with the disease, including shaving her waist-length hair. “I don’t know if it’s my newly shaved head or how strong I feel, but I’m ready to battle for my life in 2019,” she told her followers on Instagram. Treatment was long, involving two lumpectomies, chemotherapy, radiation, and hormone therapy.

But through it all, Brittany was determined to stay as active as possible—even if it didn’t look anything like the workouts she was used to. Married to Misha Cirkunov, mixed martial arts athlete and UFC fighter, Brittany would often work out twice a day or even for three hours at a time with her husband. It was as much of a part of their relationship as it was her career. As a model at Swim Week (the fashion week of swimwear), she worked out like it was her job. “I used to always push myself really, really hard. I thought that was beneficial for me because, well, no pain, no gain,” she says.

But she quickly found that she could no longer work out as intensely or extensively as she did before. Fatigue, brittle bones and joints, a weakened immune system, and pain from surgeries created boundaries around her workouts. “I didn’t want to hurt myself,” she says. “And I didn’t want to exhaust myself. I worked out to have more energy. I had to learn how to do that.”

That was the lesson. The teacher was an old knee injury (MCL tear) that found its way back after a box jump. “Because of my medication, it took a long time to heal.” The first time she hurt her knee, it healed in three weeks. This time: “It took [about] a year before I could run again.”

So no joint impact exercises, no heavy weights, no Smith machine, no long runs, and, of course, no box jumps. “I started to do things that had me lying on the ground, like stretching, yoga, Pilates,” says Brittany, who also went for a more balanced training program involving both upper- and lower-body training.

In addition to scaling back her resistance training, working out safely meant giving her cardio routine a complete overhaul. “Cardio is important, but I’m aware that chemotherapy is hard on the heart,” she says. “I don’t need my heart rate to be upwards of 90 percent.”

Her cardiovascular training turned into squat jumps and running up and down stairs until her heart rate was high but she didn’t lose her breath. “I learned how to do exercises that would get my blood circulating and keep me flexible, and kept me feeling good. It was no longer about making gains or to look a certain way. I love my body. I just want to feel good. I just want to have lots of energy.”

“I learned how to do exercises that would get my blood circulating and keep me flexible, and kept me feeling good. It was no longer about making gains or to look a certain way. I love my body. I just want to feel good. I just want to have lots of energy.”

Since her last treatment in November 2019, Brittany looks at exercise through the eyes of a breast cancer survivor. She has continued with quick 15-minute HIITs, and found a love for booty bands and bodyweight resistance, but she’s back to running. For her, exercise is now all about feeling good. “It doesn’t have to be super intense, but it gets me moving.”

Her favorite move now is bird dog, positioned on the mat on all fours, raising the opposite arm and leg at the same time. She says this feels great because it relieves tightness from her lymph node surgeries and stretches the whole body. She also loves doing Bikram yoga, “without the heat.”

She now also allows her muscles more time to recover. “I used to love being sore after the gym. But now I know that it’s not necessary for me.”

Modeling work has slowed down due to the pandemic, but she has continued speaking for many breast cancer awareness programs, including Rethink Breast Cancer and Estée Lauder Companies. For more on how Brittany trains now, see her workout below and follow her on Instagram at @brittchurchill. 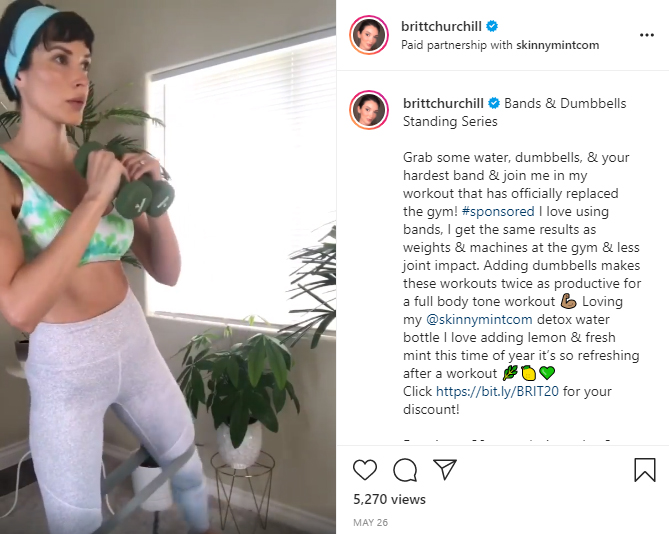 How to: Perform each exercise for 60 seconds. Complete three rounds.
Choose a weight that is challenging but manageable to hold up in front of the chest for at least a minute.

Place the booty band above your knees. In a modified squat position, holding the weights in front with your elbows bent, step side to side. Your steps should be wide enough to feel the resistance of the band.

Holding the weights in front with arms bent and the booty band placed above your knees, do a full range of motion squat, from standing to sitting deep so that your quads are parallel to the floor. When you are back in the top position, lift one leg out to the side, pushing against the band. Alternate legs after every squat.

Holding the weights with your arms bent in front and positioning your legs together with the booty band above your knees, jump to widen your stance like you would with a jumping jack. Except instead of clapping your hands overhead, push one arm back, fully extending the arm. Stretch the other arm down to the floor as you complete a full range of motion squat. Alternate arms for each time you squat.

Slide the band down until it’s just below your calves. Put one leg out front and one leg behind you. Jump, and as you do, punch the opposite arm forward, holding the weight. (You may need to adjust your weight if you went heavy for the earlier moves). Jump, switching the leg positions, and punching the opposite arm. Go at your own speed. This is called the elliptical because it mimics the hand and arm positioning of using the elliptical machine.