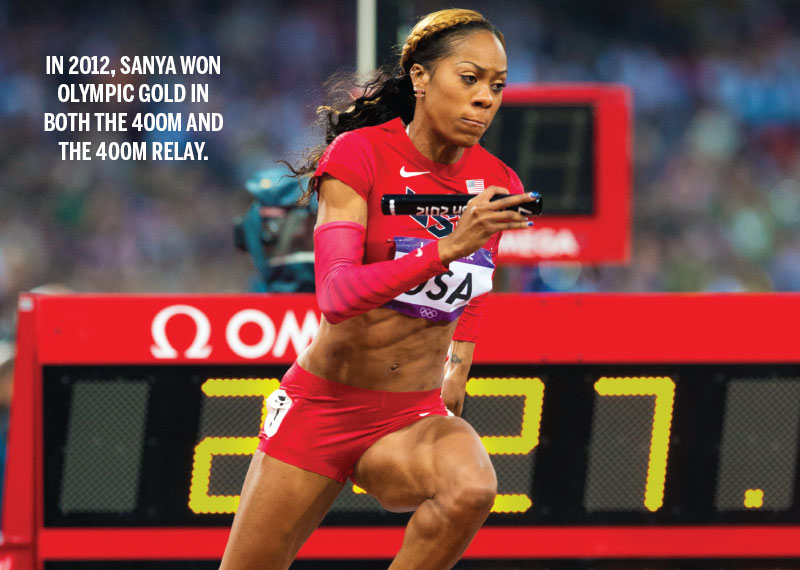 After a successful track career, four-time Olympic gold medalist Sanya Richards Ross is finally ready to hang up her sneakers.

Standing on the track of the 2012 London Olympics, Sanya Richards Ross anxiously waits for each runner to be announced. The sound of 80,000 cheering spectators and chaos of multiple cameras broadcasting to the millions at home surround her in the stadium, but when she takes her starting position on the block, Sanya finds herself completely at peace.

“Once I’m in the blocks and they say ‘runners take your marks,’” says Sanya, “my mind goes clear.” She bursts off the block and remains focused during her 49.55 seconds race, passing her competitors in the final 50 meters to win the Olympic gold medal, the fourth of her career.

Training for the track since the age of seven, Sanya moved with her family from Kingston, Jamaica when she was 12 to pursue an athletic career. Throughout high school, Sanya focused on her training and by age 18 her hard work paid off. As a freshman at the University of Texas, Sanya earned the title of 2003 NCAA 400 m Champion with a time of 50.58 seconds.

The following year, Sanya would make her Olympic debut in Athens, placing 6th in the 400 m and helping her team bring home the gold in the 400 m relay. She continued to excel at both the USA and International level and by 2005, was ranked the number-one 400 m runner in the world, a title she kept for the better part of the last decade. “I love how free I feel when I’m running; I feel closer to God. That’s when I have my best talks with Him,” says Sanya. “I feel like I was born to run.” 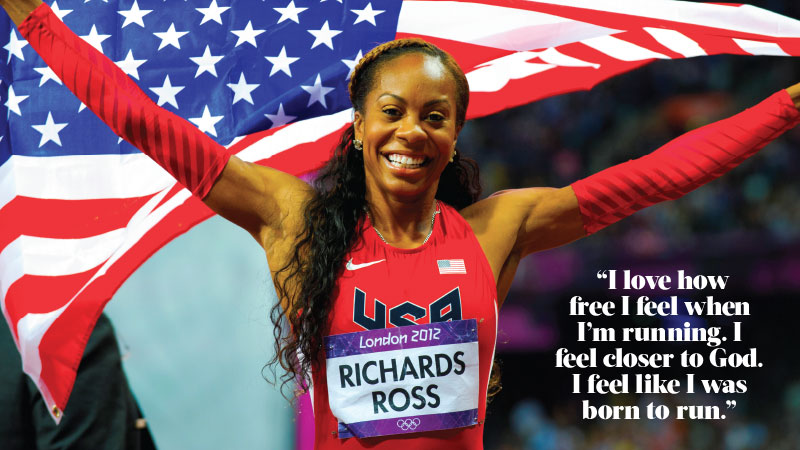 But with all of her athletic success, Sanya has remained connected to her roots and community. In 2005, she was named Visa Humanitarian Athlete of the Year for her work with The Sanya Richards Fast Track Program, a program she designed to support education back home in Jamaica. She also strives to help young athletes find their love for track and field with her Team SRR Sports Clinic workshops for youth and their parents.

Despite being a role model and a veteran of the sport, the five-time World Champion and four-time Olympic gold medalist says she still gets race-day nerves. “The day of a final…it’s tough. You want it so badly,” says Sanya, now 31. “I remember experiencing so many emotions [at the Olympics] in 2012. You think of all the hard work. I just tell myself ‘I’m prepared. I’m the best. I’m a champion.’”

To prepare for big races, Sanya follows a demanding training schedule that includes five workouts a week on the track and three in the weight room. “I think the weight room has been a huge component to my success on the track, to be able to be explosive and strong,” she says. Sanya’s weight workouts consist of full-body lifts, like power cleans and snatches, in addition to combining fast twitch training with band work to keep her lean and strong. When she isn’t training, Sanya says she’s either eating (she follows a high-protein, low-carb diet with lots of fruits and veggies) or resting. “As I’ve gotten older, I realize how much I need recovery.”

For Sanya, recovery has been especially crucial since having surgery on her big toe last November for hallux rigidus, a painful condition she’s been plagued with since 2007. The recent surgery, her third, left Sanya almost six months behind her training schedule for this month’s Olympic trials in Oregon. While she admits the setback may have shaken her confidence, she’s refusing to let it affect her focus. “It has been really tough coming back from this surgery but I really wanted to go for it this year,” says Sanya. “I do feel like I can be the best in the world.”

FUN FACT:
When Sanya was 9, she told her teacher
she would be an Olympic Champion.

Whatever happens, Sanya says she’s made peace with her decision to hang up her sneakers following what she hopes will be her fourth Olympic appearance, and looks forward to retirement with her husband, NFL cornerback Aaron Ross. The pair met during Sanya’s freshman year at the University of Texas in 2003, and have been married since February 2010. “I’m looking forward the most to becoming a mother,” says Sanya, of their plans to start a family, adding that she will also continue to work with her family-owned businesses and pursue a career in broadcasting. “I’ve had an amazing career. I’ve been so blessed,” says Sanya. “But it’s really been tough the last three years with my injury. It’s just been my love for the sport that’s kept me in the game. This will be my final race for sure.” 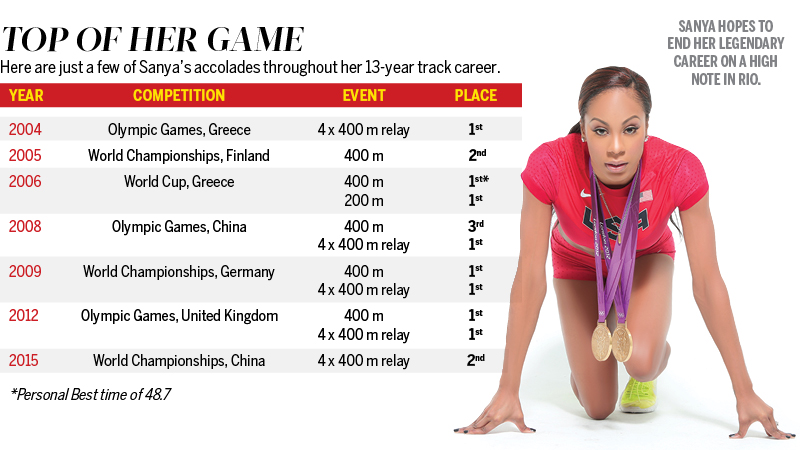