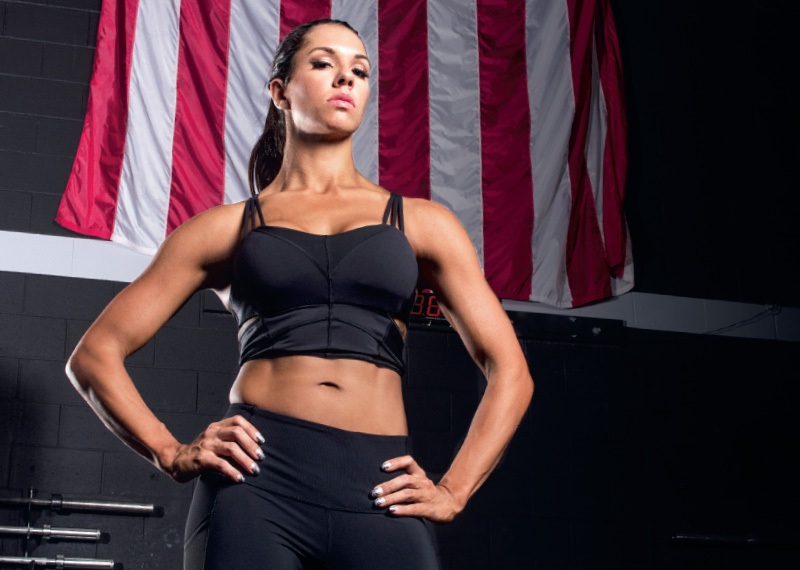 At just 20 years old, Kerri Kienzle left home and joined the Navy. Her first few years were spent working 10-hour days aboard a ship with almost no communication with friends and family back home. The long shifts led Kerri to choose the quickest fix to her hunger, whether it be a box of cookies or multiple snacks from the vending machine. It wasn’t long before eating became a coping mechanism for the extreme loneliness she experienced on the ship. “It was a comfort thing,” recalls Kerri. “Whenever I would be stressed out or really tired, I would crave sugar.”

During her entire five years in the Navy, she was only able to see her family once a year, missing countless holidays and occasions. But when interacting with her Navy peers, she forced a brave face. “Anytime anyone admits there is a problem, it is a shameful thing,” says Kerri. “You’re weak if you admit that.”

Towards the end of her service, Kerri was sent to Afghanistan for a year-long mission, where she was required to manage supply orders and speak to women in remote villages about their needs. But shortly after arriving, Kerri’s base was attacked and she found herself in between two rocket-propelled grenades that hit a fuel tank causing an enormous fire. “It felt like it was in slow motion and everything was muted,” says Kerri. “I could see people’s mouths moving but I couldn’t comprehend what they were saying.” After the traumatic encounter, her base hosted a surgical unit for victims, where Kerri was witness to the aftermath every day. “I think when you’re in the middle of it, it’s almost easier to deal with,” says Kerri. “You don’t have a choice.”

“It’s not something you want anyone to know you’re dealing with.
You don’t want to be perceived as weak.”

Before returning home from Afghanistan in July 2011, Kerri was sent to another base specifically to decompress from deployment where she had access to programs for those suffering from Post Traumatic Stress Disorder (PTSD). But her only focus was getting home. “It’s not that they don’t offer resources,” says Kerri. “But you’re just on a mission to get home.”

Within two weeks of returning to her home in Boston, she knew something was wrong. Kerri began experiencing anxiety over the most unlikely things. She panicked about getting into cars, convinced she would get into a car accident, or would wake up in the middle of the night thinking there was an intruder in her home. She also suffered from depression, which made social life nearly impossible. “It was exhausting trying,” she says. “Trying to make people believe that you’re okay and that nothing is wrong with you.”

Approximately 2.4 million Americans—that’s eight percent—have suffered from PTSD at any given time, but still, Kerri felt alone. “It’s not something you want anyone around you to know you’re dealing with,” says Kerri. “You don’t want to be perceived as weak, and like you can’t handle it.” Kerri’s PTSD and social anxiety lead to more eating in secret. She would make frequent trips to the store to buy junk food and hide the wrappers before going home. “No one would know how much I ate.”

Left to right: Kerri at her heaviest weight, almost 200 lbs; Kerri in Kunar, Afghanistan in November 2010; Receiving a commendation medal at the end of her tour in 2011.

After a year of struggling in secret and reaching just shy of 200 pounds, Kerri decided to get help. Her doctor prescribed antidepressants, and she slowly started taking steps towards living a healthier lifestyle, walking a few miles a day and avoiding fast food. “I wish I talked to someone sooner,” she says. “I went through a year of being absolutely miserable, and I didn’t have to feel like that.”

Within a few months she had lost 25 pounds, and was looking for new ways to continue exercising. She signed up for a 10-week adult gymnastics class, where she became friends with a personal trainer, Dustin, and began training with him three times a week. “I made a commitment to him and myself that I would never cancel a training session.” With Dustin’s help, Kerri reached 160 pounds and was ready for the next challenge.

In April 2015, Kerri competed in her first fitness competition in the Bikini category, and has since competed in three more shows placing in the top five. “More important than how I’ve placed is I’m happy with how much I’ve learned about myself in the process,” she says. “I feel like fitness is the most underutilized antidepressant.”

While she has come a long way, Kerri, now 29, says depression and PTSD still occasionally affect her life. But now she knows a good sweat session can make all the difference. “A noise similar to a bomb will trigger a panic attack,” she says. “Mental illness is something that is never cured, you just learn how to manage it. The best thing to do is not allow myself to skip the gym”

“I wish I had talked to someone sooner. I went through a year being absolutely miserable, and i didn’t have to feel like that.”

For more information on PTSD and how to get help for yourself, a friend or family member, click here to visit the National Center for PTSD website.