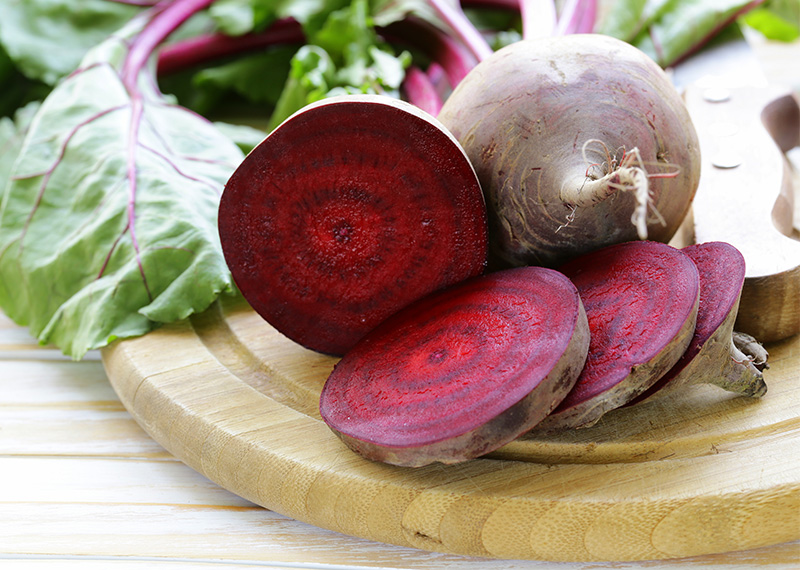 In case you haven’t heard, beets have been causing a buzz in the sports nutrition world lately, thanks to their performance-enhancing potential and mega health benefits, like lowering blood pressure and fighting certain types of cancers. Read on to learn how beets can improve your workout and overall health.

Vegetables, such as beets and beetroot, naturally contain chemicals called nitrates. Yes, nitrates have developed a bad reputation for being used as a preservative in junk foods, such as hot dogs and lunchmeat, but when organically occurring in vegetables, it becomes a powerhouse ingredient.

These naturally occurring nitrates dilate blood vessels, allowing for easier passage of blood to and from the heart, which lowers blood pressure. What’s more, recently they’ve been shown to promote nitric oxide (NO) production, the magic ingredient for those performance-boosting side effects.

You’ve no doubt heard of several pre-workout formulas containing nitric oxide (NO) to help you achieve multiple training benefits: increased endurance, amped energy, and faster recovery—not to mention, it prolongs the look of pumped-up muscles, even after your workout is through. The point? Beetroot may be Mother Nature’s way to scoring the ultimate sweat session and that coveted pump.

A 2009 study led by researchers at the University of Exeter found that nitrate-rich beetroot juice was linked to increased endurance in male cyclists. When the subjects consumed 500mL of organic beetroot juice per day for six days prior to testing, they were able to perform up to 16 percent longer than when they were given a placebo. Bonus? They were also found to have lower blood pressure at rest.

Another recent study published in the European Journal of Applied Physiology found that beetroot juice could shave a few seconds off your race time. Researchers had male subjects load up on the stuff the day before performing running tests, then again the morning of the race. Another group of runners did the same with a nitrate-free concoction. The result: the guys who chugged the beetroot juice were able to run 4.2 percent further in time-restricted sprint trials than those who didn’t.

HOW TO USE IT

Beets are dosed based on their nitrate content. According to recent research, a 400-500 mL serving of freshly juiced beetroot pre-workout may do the trick. If you’re looking for a more versatile, on-the-go solution, a beetroot extract supplement or store-bought juice may be your answer.

1. Vasotropin by Gaspari is an NO-promoting supplement that harnesses “naturally occurring nitrates derived from a real plant extract.” Can you guess which one? Yep. It’s beetroot. $48; gasparinutrition.com

2. Dynamic Health’s Beetroot Juice offers the benefits of the juice itself, in a convenient to-go container. $19 for 32oz; walmart.com

3. Beet Root Beta Vulgaris capsules from Nature’s Way offer the benefits of beetroot in easy capsule form, in case some fresh juicing just isn’t in your near future. $6 for 100 capsules; vitacost.com

Creatine: What You Need to Know