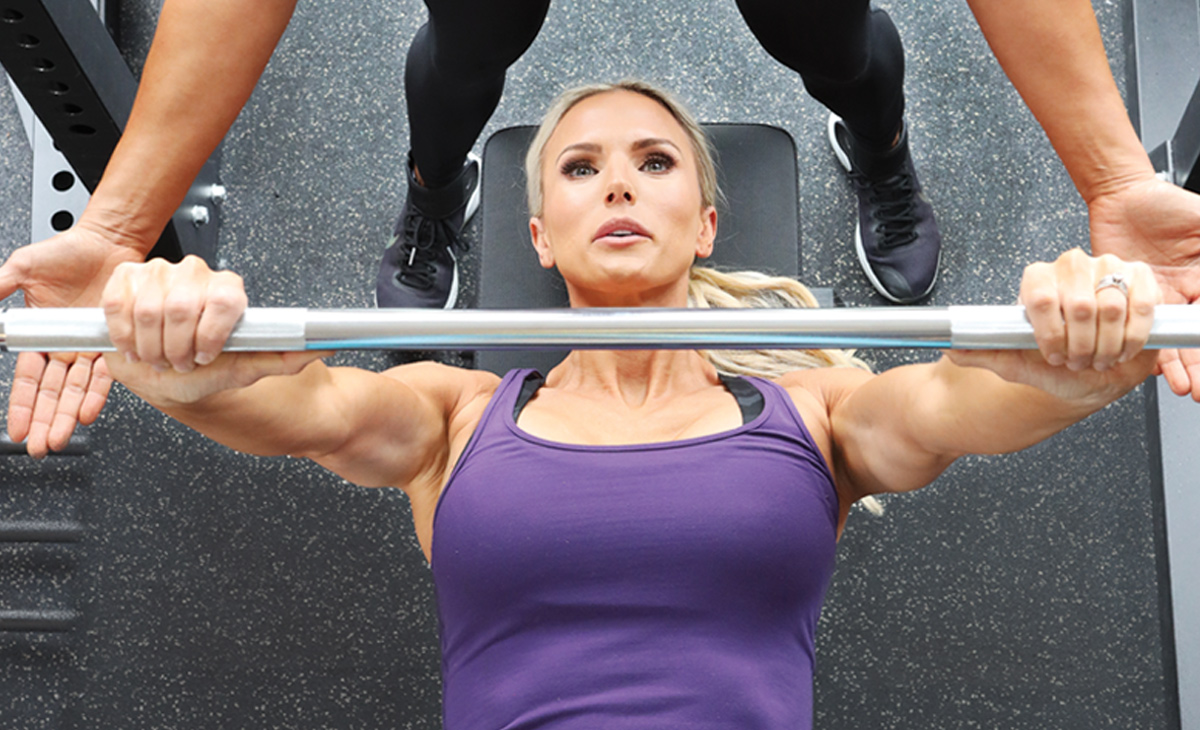 It only takes one wrong move for things to go south in a hurry when it comes to big lifts in the gym. Since most good training is founded on principal, it’s easy to “follow the rules” of the movements, so to speak—but individual variation may be cause for some sneaky missteps that can put a lifter at risk. That translates to chronic pain and acute injury when proper regard for the finer details isn’t paid. These five classic movements you think you have a handle on could be wolves in sheep’s clothing if you don’t watch out for pesky injury traps. 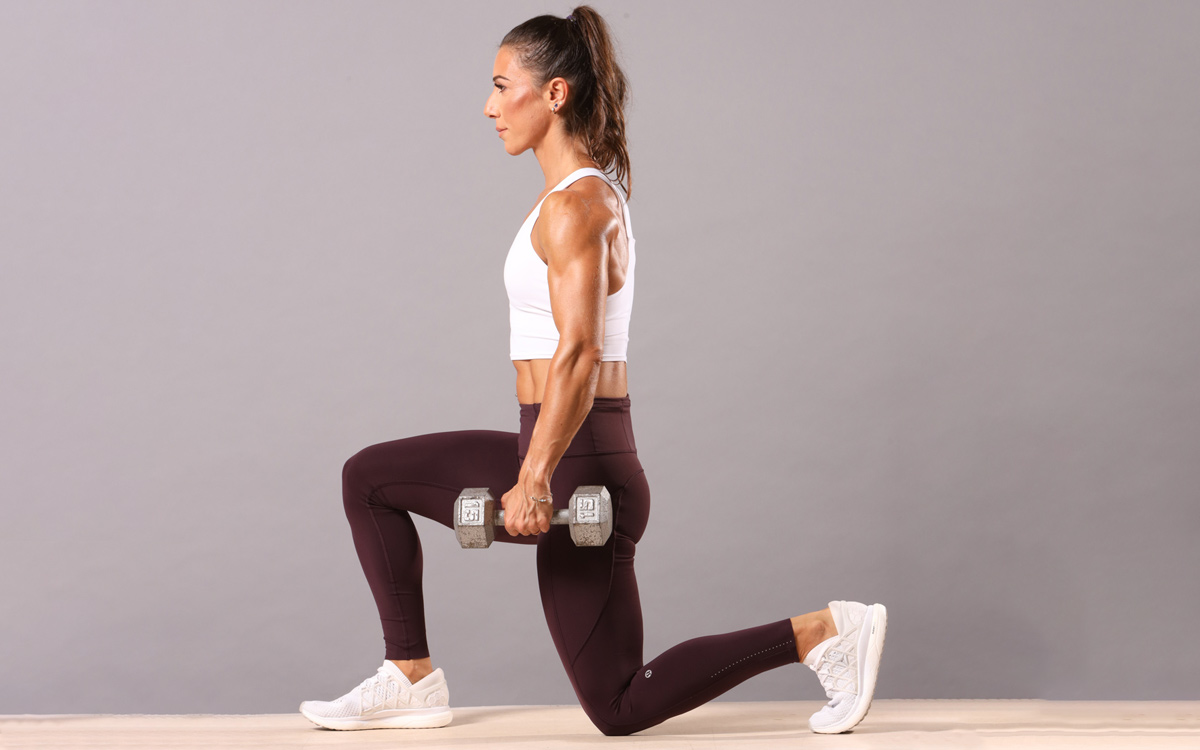 Walking lunges (and stationary lunges) are simple in execution: Take a step forward, make sure the front heel doesn’t raise, and descend into a deep, relatively upright position, repeating on the opposing side. People are usually most concerned with the front-to-back alignment of the body, making sure the step isn’t too long or too short, but they often miss checking side to side alignment.

Especially for the female anatomy, this becomes an area that can be a real secret weapon to combat knee or hip joint pain. Women are typically built with a wider pelvis and a Q-angle (which means a slanted femur position as it travels toward the knee). Because of this, it’s easy for the knees to fall inward too far towards the midline when doing split squats and lunges. In a perfect world, the knees, hips, and shoulders would be all properly stacked on top of one another in a unilateral exercise. Letting the knees fall inward breaches this alignment and adds joint stress to the hips and medial knees.

Lunge with wider strides. That doesn’t mean longer strides—it means stepping forward and slightly outward with each step. It’ll force the knee to stay under the hip, promote better inner thigh activity for stability, and provide you with a better quality lunge that keeps you out of harm’s way.

Overhead Press: If You Can See The Bar, You’re Doing It Wrong 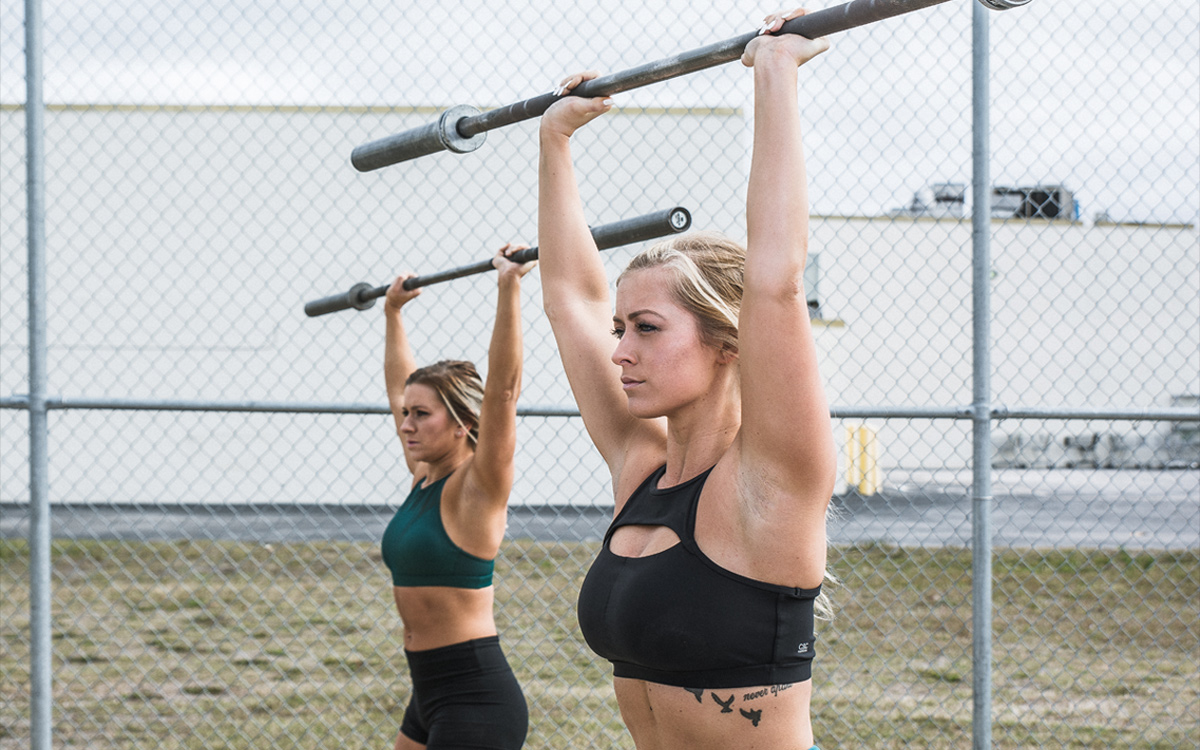 The overhead press is probably the biggest battle with physics in the world of fitness training. It’s a fairly straightforward movement, but having a strong press eludes many lifters because they don’t respect the laws of the universe. Look around your local gym, and without fail, you’ll likely notice that most people who overhead press with a bar press the weight slightly in front of them. That’s a sure-fire way to make the shoulders and lower back scream in pain as time goes on.

The first thing to remember: The bar must travel in a straight line. That means perpendicular to the floor in angle. As long as the bar’s path is uninterrupted from point A to point B, it’s up to the body to conform to the path by applying the proper support it needs.

Start with the hands on the bar, just outside shoulder width. It’s okay if the wrists are slightly “broken” to have it rest in the right starting point. Next, press the weight upward. Aim for your nose; you won’t hit it. Using this cue will help you keep the chin tucked while keeping the bar close to the body, where it belongs. Once you see the bar clear your forehead, get under it by pushing the head and chest “through the window” you created with your arms. This will allow your elbows to flare outward slightly, to create additional support to the bar on its way up. Continue pressing upwards until the arms are fully locked out and straighten the wrists upon your finish. Your biceps should be beside your ears, and you shouldn’t be able to see your arms or the bar in your peripheral vision when you look straight ahead. 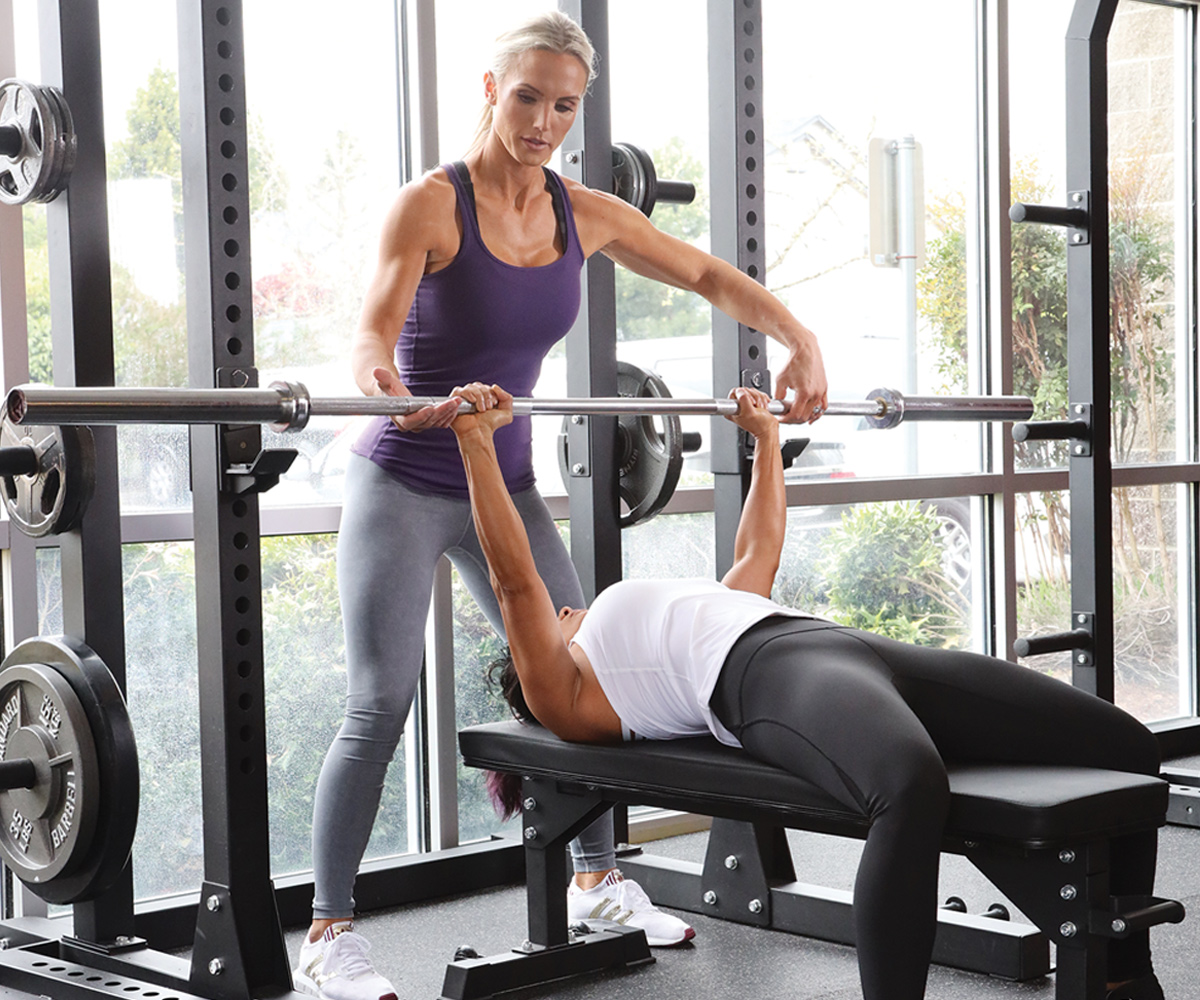 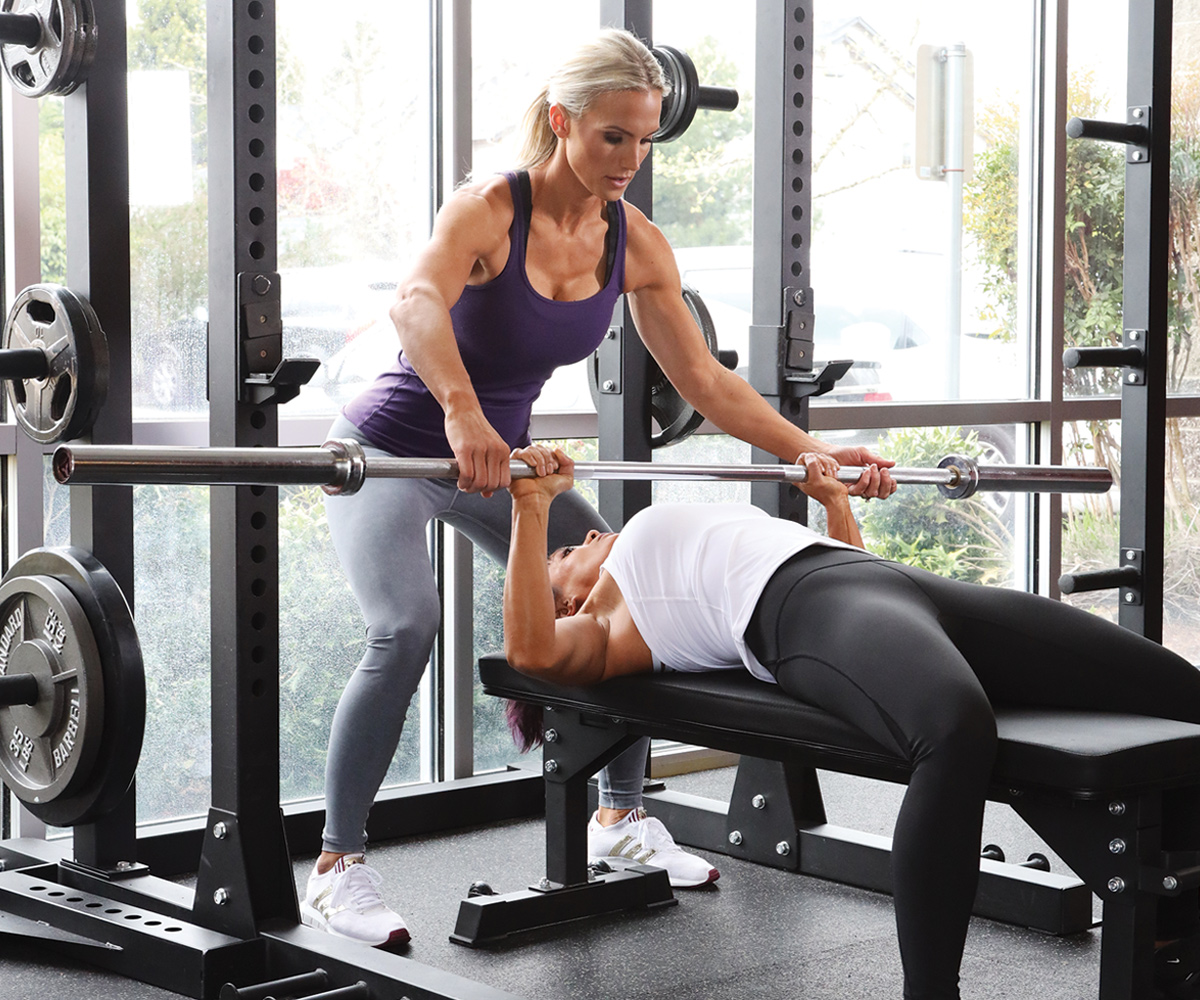 Getting square and stable on the bench for bench presses, be they barbell or dumbbell variations, really comes down to the details of execution. When you lower a barbell or dumbbell to chest level with a relatively flat back (that means little to no arch in the lumbar region and a sunken ribcage), it means a much greater distance to get to the bottom position, and more stress on the shoulder joint.

Think about four points of contact when setting up on the bench. Your feet (on the floor), your butt, upper back, and head (on the bench). This will keep the feet tucked in and the lower back arched to raise the ribcage higher for a taller, more sturdy point of contact when the barbell (or dumbbell) meets torso level. This will equal less joint stress, more chest activity, and a stronger press. 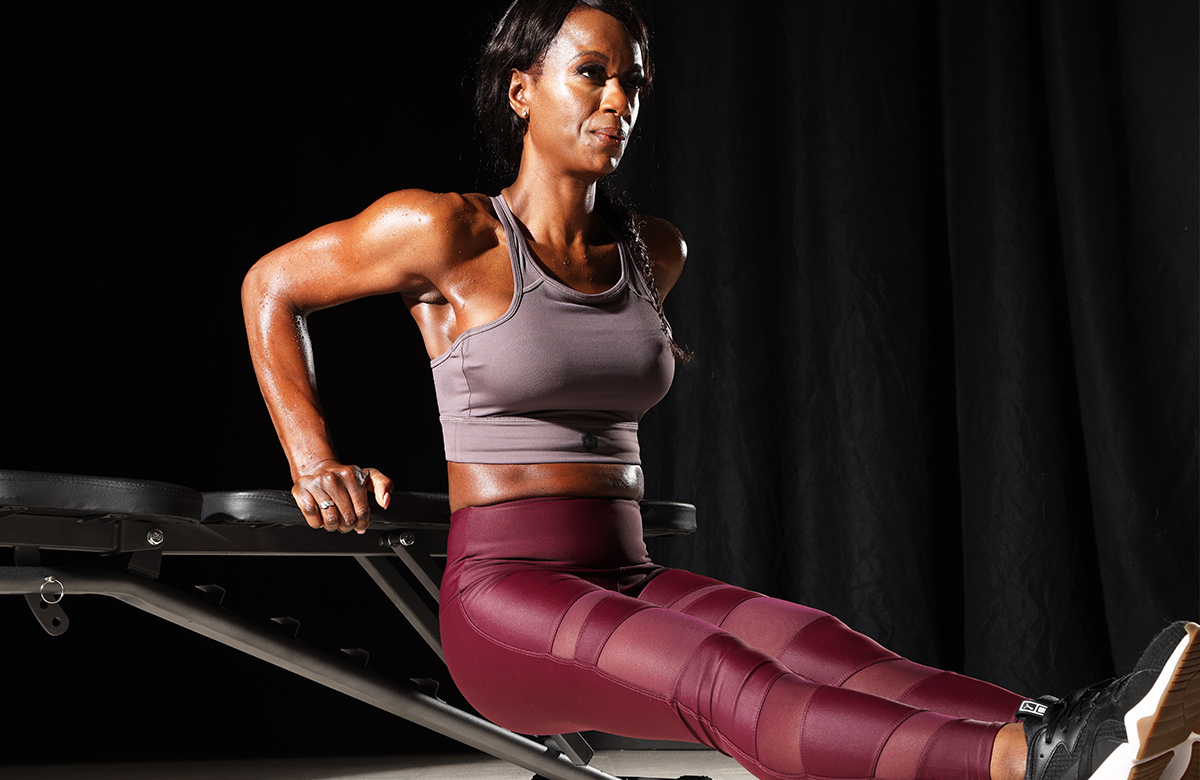 The most common mistake people make with dips is simple to communicate: They choose the wrong variation. Finding the nearest bench or box may be a convenient set-up to perform standard dips—but that’s not exactly the bee’s knees for healthy shoulders. As a general guideline, avoid bearing load while the shoulder is stuck in internal rotation. Keeping your hands behind your back on the edge of a bench places the shoulders in exactly that position, which reduces freedom of mobility and upper back involvement for support. The worst part is, because of the nature of the movement, there’s virtually no “correction” for this position once in it.

Plain and simple: Use parallel bars. You may not be strong enough to perform your own bodyweight dips, but it shouldn’t stop you from taking advantage of band assisted dip variations on parallel bars, or jumping on a Gravitron machine to perform your reps with the assistance of external counterweight. The neutral grip parallel bars will be the perfect modification to externally rotate the upper arm (and shoulder) just enough to get those joints out of harm’s way while performing the exercise. 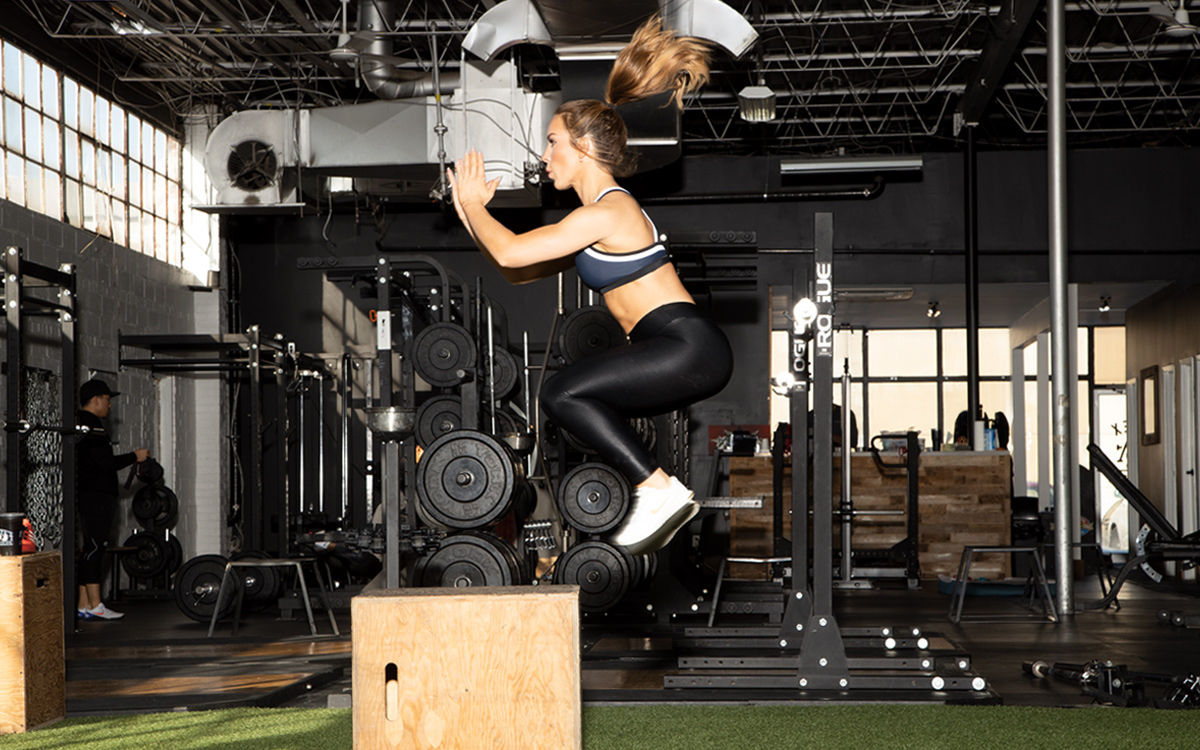 For such a seemingly simple task of jumping onto a box, there’s a lot that can go wrong. Distance from the box in the starting position plays a role. Too close, and you can catch the fingers on the edge of upswing; too far away, and you run the risk of injuring the shin or ankle, or worse, missing the box completely. The landing should also be taken into account since this is an explosive jump—but the landing should be soft to avoid excessive impact on the knees and hips. Jumping off the box after each rep also loads bearing joints with unnecessary impact force.

To perform a safer box jump, start with your starting distance. An outstretched arm’s distance is a good starting point. As you prepare to jump, you may be tempted to swing the arms down as you take off; instead, swing them upwards to build momentum into your vertical jump. As you land, focus on a quiet touch to absorb the impact, and keep it controlled. No matter what you’ve seen on YouTube demonstrations, don’t let your butt hit your heels—if you can’t make this happen, the box is too high for you. Finally, save your joints by stepping down from the box instead of jumping off, and take a moment to gather yourself before the next rep. Speaking of reps, box jumps should be kept to a max of eight per set.