Home Training How to Train Smarter, Not Harder 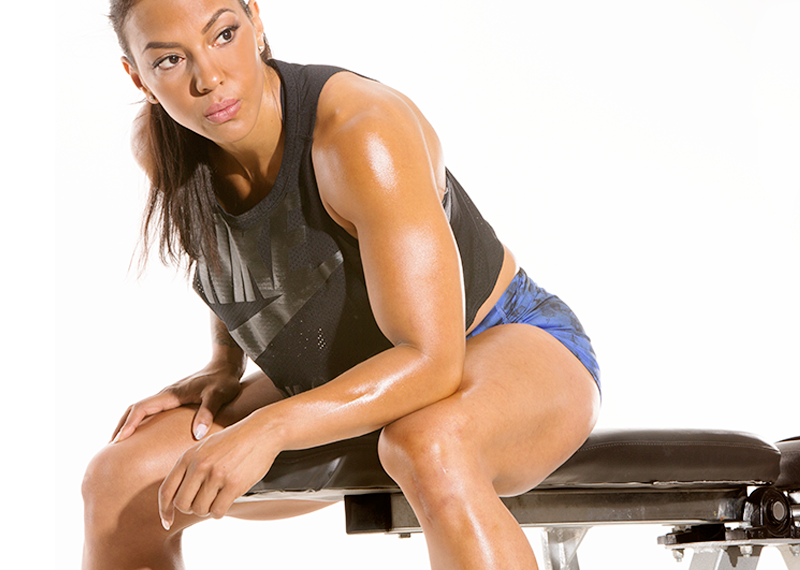 For years, it’s been common practice among bodybuilders and gym rats to finish off a gym session with a round of steady state cardio. But these days, spending that much time in the gym just isn’t practical—and now science says, it may not be effective either.

In a recent study (actually performed on women) published in the European Journal of Applied Physiology, scientists trained 20 young female participants over the course of six weeks. One group performed only lower body power training while the other group did the exact same lower body workouts, but with an additional 30 minutes of low-intensity running at a moderate pace (60-70% of max heart rate) after each strength session.

The researchers then measured the participants’ jump performance, leg press force, speed (rate of force development), and strength (via a one-rep-max half squat). They also examined samples of tissue to measure muscle fiber changes.

The results? Even though both groups performed the exact same lower body power workouts, the group that added 30 minutes on the treadmill could not jump as high, but more importantly, their muscle fibers had less hypertrophy (meaning they were smaller).

Researchers concluded that adding endurance work directly after a lifting session made the body confused as to which properties to prioritize—strength and size, or endurance and performance—a conundrum classically known to physiology nerds as the interference effect.

The good news is, this effect can be easily avoided, and better yet, you don’t have to spend two hours in the gym just to get a good workout. In fact, by doing a little less, you’ll actually see better results. By ditching post-strength training cardio, and instead shifting your run (or elliptical, or step mill) to the morning, you’ll give your body plenty of time to recover, so when it comes time to hit the iron, there won’t be any confusion.

The following is an example of one day of training, where both cardio and strength training are performed:

Wake up, drink a glass of water, and immediately go for a fasted jog or run at a moderate pace. Studies show you’ll actually burn more fat by performing low-impact cardio on an empty stomach than if you downed breakfast first. Just try to keep it to a max of 30 minutes.

How to: Perform each pairing of exercises for the prescribed number of reps and sets, alternating back and forth from the first exercise to the second. These are not supersets. Rest as much as you need between exercises to complete all the reps. For example, you will perform A1, rest, then perform A2, rest, and repeat.

Note: The weight should be heavy enough that the rep range is challenging, but you are not hitting failure. 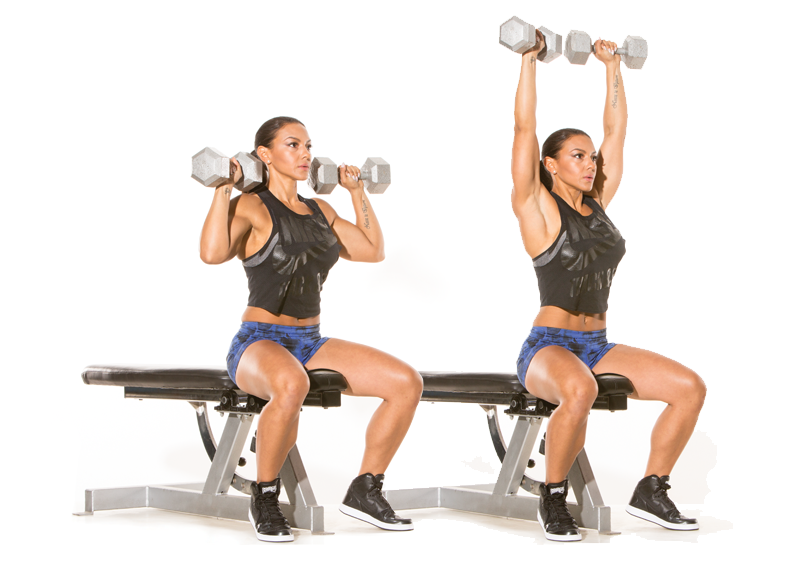 Setup: Sit tall on the end of a flat bench, holding a dumbbell in each hand. Hold the weights above your shoulders so elbows are at 90 degrees and slightly in front of you, palms facing out.

Action: Extend your arms to press the weights straight overhead. Lower back down with control and repeat. 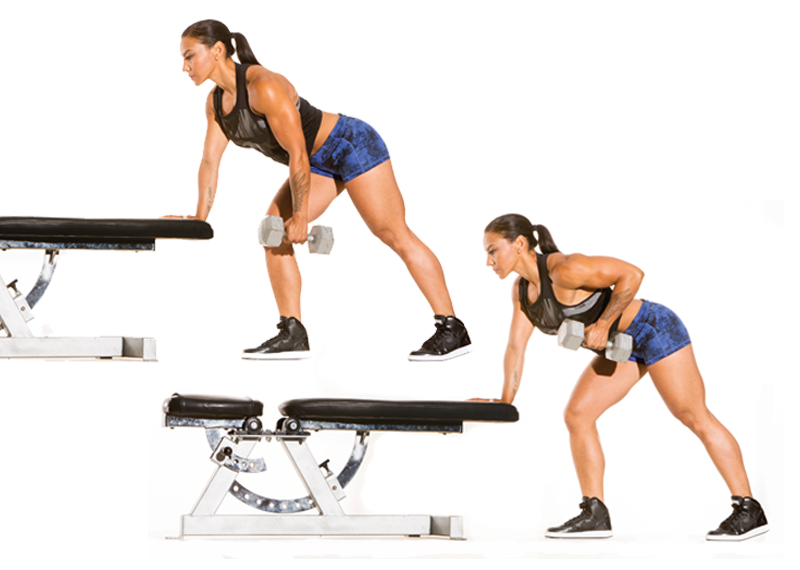 Setup: Hold a dumbbell in one hand and place the opposite hand on a bench for support. Stand with one foot forward and the other back with knees slightly bent.

Action: Bend your elbow and pull the dumbbell to your hip. Lower back down and repeat. Complete all reps then switch sides.

Setup: Adjust an incline bench to approximately 30 degrees. Hold dumbbells with an overhand, shoulder-width grip with arms locked above your chest.

Action: Bend your elbows and lower the weights with control until it makes contact with your chest. Press back up to the starting position and repeat. 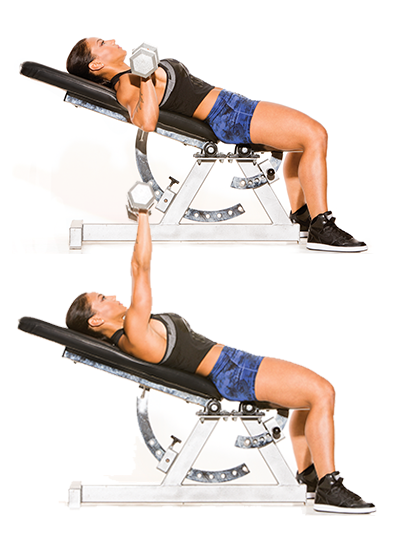 Setup: Stand in front of a weighted barbell on the floor. If needed, place ends on platforms to elevate them. Hinge from the hips and grab the bar with an underhand grip.

Action: Bend your elbows and pull the bar to your waist quickly, then lower back down with control all the way to the floor. Reset your stance if needed and repeat. 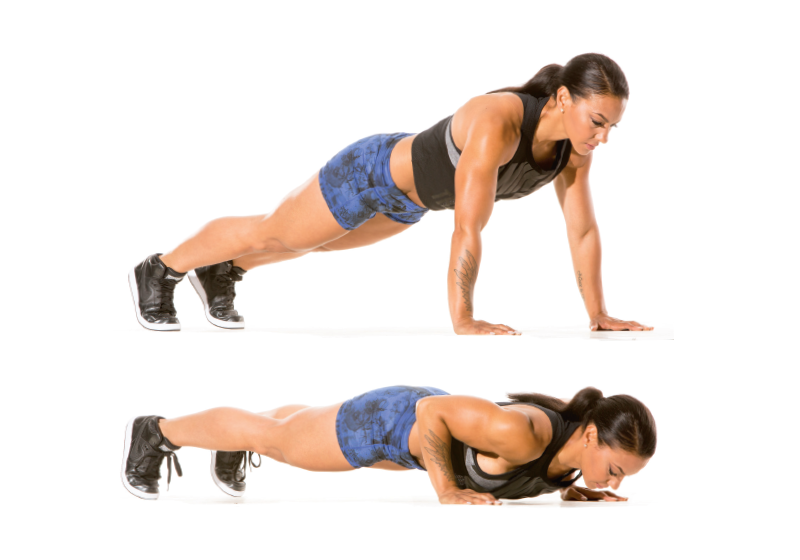 Setup: Get into high plank position, keeping your neck neutral and forming a straight line with your body.

Action: Bend your elbows to lower your chest towards the ground. Extend your arms to press back up. Repeat.

Setup: Stand holding a weight plate with hands gripping the sides. Hinge from the hips and lean over, keeping your back flat. Extend your arms downwards.

Action: Bend your elbows and pull the plate towards your torso. Lower back down and repeat. 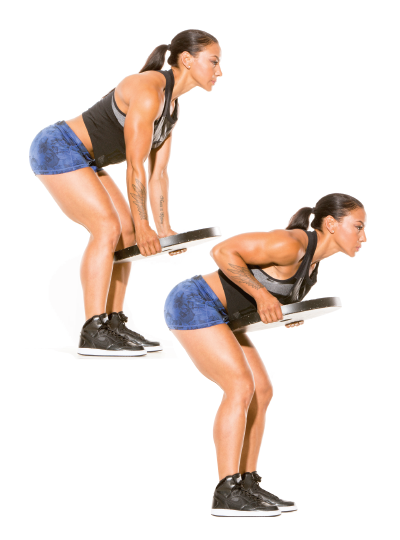